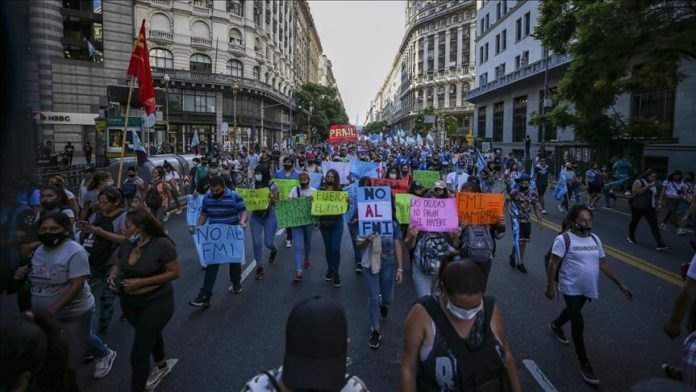 Environmental protests and strikes continued across the globe in the first month of 2022, with demonstrators demanding more decisive action to tackle climate change.

Activists and citizens continued online campaigns and street protests while keeping socially distant due to the ongoing coronavirus pandemic.

The events included Fridays for Future’s weekly protests, which were launched in 2018 by Swedish environmental activist Greta Thunberg, and global campaigns’ rallies against anti-environmental practices and attitudes.

– Protesters gather at Plaza de Mayo, Argentina after the call of environmentalists against the decision of the Environment Ministry allowing oil exploration in the Atlantic Ocean.

– On the first Fridays for Future strike of the year, climate activists and environmental protesters continue to raise awareness about climate change, with nonprofit organizations supporting their efforts.

– Extinction Rebellion activists in Poland hold a demonstration against the heavy deforestation by the governmental organization State Forests in Krakow.

– Thousands of Maasai cattle herders in northern Tanzania protest against a government plan to evict them from their ancestral land in a bid to pave the way for trophy hunting and eco-tourism investments.

– During the last Fridays for Future strike of the month, climate and environmental activists continue protesting for action on climate change and the environment, demanding more action from world leaders.​​​​​​​

– “We can’t allow the government to lift the ban on bee-killing pesticides,” Greenpeace group says on Twitter, criticizing the British government’s approval for emergency use of these chemicals.