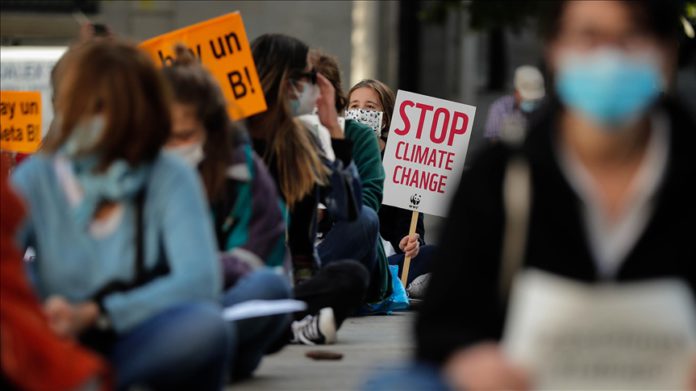 Strikes, demonstrations, and protests continued across the globe in the second month of 2021, with protesters demanding more decisive actions to tackle climate change.

Activists and concerned citizens continued their online campaigns and street protests while keeping socially distant due to the coronavirus pandemic.

Here is a timeline of protests and demonstrations compiled by Anadolu Agency.

– Indian police lodges a complaint against Thunberg over her tweets on the ongoing farmer protests in India, according to local media reports.

“I still #StandWithFarmers and support their peaceful protest. No amount of hate, threats, or violations of human rights will ever change that. #FarmersProtest,” Thunberg says on Twitter.

– Indian climate activist Licypriya Kangujam completes her second year of #SchoolStrike4Climate. “I demand our leaders to enact a climate law in the parliament to give climate justice to the millions of poor vulnerable people who are the victims of climate change,” she says on Twitter.

– Mentioning the effects of collapsing Himalayan glacier, David Fopp, a senior lecturer at Stockholm University, calls for action on climate change as he says the incident with disastrous consequences for hundreds of people in India is linked to climate change.

– Brazilian climate activist Joao Duccini completes his 50th week of university strike. “Emissions are still the same, the media is still not talking about it and the climate crisis is still not treated as a crisis,” he says on Twitter.

– On Valentine’s Day, some Extinction Rebellion protesters in Boston, Massachusetts holds streets by carrying signs reading “Climate action is an act of love”.

– Turkish climate activist Deniz Cevikus completes her 100th week of climate strike. “When I started striking 100 weeks ago, I never thought I would go on doing this for so long, but I did. I’m very proud to be doing my part in this journey to save our future,” she says on Twitter.

– A Delhi court in India grants bail to Ravi, an Indian climate activist arrested for sedition in connection with a toolkit to help to protest farmers.

– The last Fridays for Future strike of the month is held.

– On his 33rd climate strike, 12-year-old Indian climate activist Aarav Seth along with a group of other protesters stage a protest. “They cut #forests, they destroy #nature & we lose lives, but they consider it #GDP Growth,” he says on Twitter.

– Turkish climate activist Atlas Sarrafoglu called on activists around the world to support them in having the Paris Agreement ratified in Turkey. “We are running out of time and they are running out of excuses,” he says on Twitter.

ANALYSIS – US reaches out to Central Asian states on Afghanistan