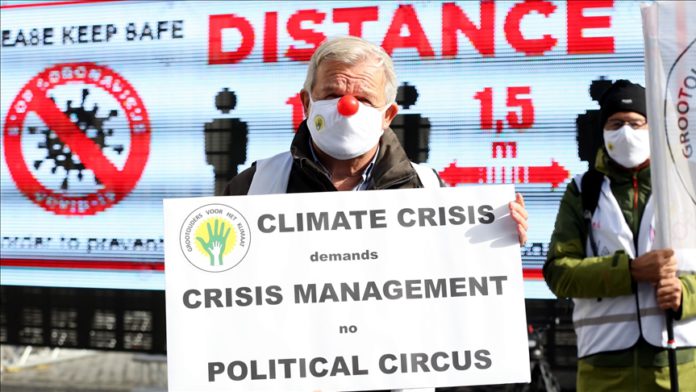 Due to the deadly COVID-19 pandemic sweeping 2020, climate protests and environmental campaigns were mostly held online, along with a large number of demonstrations protesting political and economic policies across the world.

Climate protests and strikes were held both in streets and on social media around the world in 2020 by stressing the threats to liveable planet and ecosystems, demanding from world leaders to address and take urgent actions on climate change and to keep their promises on global warming below 1.5 degrees Celsius.

The Fridays for Future movement was leading to global climate and environmental demonstrations during 2020 while the 350.org and Sunrise movements, Greenpeace, and the Extinction Rebellion group were also involved in many actions over climate-related activities.

The following are the major global climate change protests, strikes and events in 2020 compiled by Anadolu Agency:

– The first climate strike of 2020 is led by the Fridays for Future movement, taking place across the globe from Uganda to Australia, with students not attending school for one day a week to raise awareness on the effects of climate change.

– A troupe of elephants and school students hold a silent march at an elephant camp in Thailand to raise awareness for the millions of animals killed in Australia’s raging bushfires.

– Hundreds of protesters wearing white masks hold the streets in Tuzla, a town in Bosnia and Herzegovina, to call for governmental action on air pollution in the region.

– Extinction Rebellion demonstrators block entrances to Shell’s headquarters in Aberdeen, Scotland in solidarity with Nigerians they say are suffering from the company’s actions in the country.

– Hundreds of activists protest for urgent action on climate change in Davos, Switzerland, where world political and corporate heavyweights have gathered for the annual World Economic Forum.

– Palestinian farmers gather and display affected agri-product by poisoned pesticides to protest against Israel, claiming it poisons agricultural lands near the border and is harming crops in Gaza City.

– Students from more than 55 universities across the US hold rallies and demonstrations to call for a fossil-free world as part of Fossil Fuel Divestment Day.

– Some 20 Sunrise Movement activists, including six underage students who demand lawmakers back “Green New Deal” are arrested at the Capitol protest in the US.

– Led by Child Movement, thousands of children in India leave their classes for climate protest and demand that the government enacts a climate change law “as soon as possible.”

– Fridays For Future Uganda activists celebrate the first anniversary of the beginning of the climate strikes in the country with a tree planting event.

– Climate strikers and environmental organizations around the world move protests from the streets to online due to the coronavirus outbreak.

– People around the world celebrate Earth Hour — an event that has been engaging people and creating awareness about the Earth and environment — in their homes due to the COVID-19 pandemic to show support for the planet.

– Climate activists from around the world, striking to save the Congo rainforest, gather online to raise their voices for the protection of the rainforest and its flora and fauna.

– Many climate strikers and activists around the world join the digital strike following the call by the Fridays for Future movement.

– Earth Day’s 50th anniversary is celebrated by millions of people around the world online due to the novel coronavirus outbreak.

– Over 100 environmental protection organizations around the world, including Extinction Rebellion and Fridays for Future, sign the international unity statement calling to “Defend the Defenders”, referring to environmental defenders, especially indigenous people.

– Climate activists around the world hold digital campaigns online on the first Friday of the month and stressed the “need to divest from fossil fuels and build up jobs in renewable energy” on the occasion of International Workers’ Day.

– Demonstrators gather in the Greek capital Athens to protest against the government for using the COVID-19 outbreak as a cover to pass an anti-environmental law called Modernized Environmental Legislation which allows the private sector to develop projects in protected areas.

– Japanese environmental NGOs submit a petition for the cancelation of the Vung Ang 2 coal-fired power generation project in Vietnam to the Japanese public and private sectors.

– The first strike of June by Fridays for Future also mark the World Environment Day, and voice support for Black Lives Matter protests and Congo rainforests as well as demonstrations against climate change.

– Mentioning the Swedish court’s “green light” for a new oil refinery, climate activist Greta Thunberg says on Twitter: “It will make it impossible for Sweden to reach the emission targets in line with the Paris Agreement. End of story.”

– Environmental organizations start a digital campaign for the Lumad indigenous group in the Philippines that are forced out of their lands due to environmental degradation-related activities such as mining.

– A group of people, led by the Extinction Rebellion movement, stage a “die in” protest in Hong Kong to raise awareness for the danger of air pollution in the region and the global climate crisis.

– As many as 300 Fridays for Future activists gather in the biggest physical protest in Hamburg, Germany since the COVID-19 outbreak, calling for climate justice.

– 350.org calls on people to join a global online campaign on July 16-18 to raise awareness on prioritizing social and racial justice, and climate change via #JustRecovery tag on Twitter.

– Marking the International Day of the World’s Indigenous Peoples, 350.org say indigenous peoples are facing the threats of COVID-19 and the disastrous expansion of the fossil fuel industry and called everyone to show their support regarding the issue.

– Thunberg, the founder of the Fridays for Future movement, completes her 105th week of climate strike.

– Australia-based Tomorrow Movement calls for a virtual march next month amid the coronavirus pandemic.

– Thousands of people take to the streets of Port Louis, Mauritius’ capital, to protest the deaths of at least 40 dolphins following an oil spill by a Japanese bulk carrier.

– Greenpeace protesters block an oil tanker in Sweden and demand the government stop the planned expansion of an oil refinery owned by Preem.

– Environmental and climate activists around the world hold street demonstrations in line with COVID-19 measures as part of the Global Day of Action for Climate Justice.

– Kenyan young environmental activist Patricia Kombo, known for tree planting activities, criticizes the pollution problem in her country and says “Kenya is not a dumpster” on Twitter in her 65th school strike as part of #AfricaIsNotADumpster campaign.

– Young climate activists around the world meet at the Global Gathering for Climate Justice which includes dozens of events held virtually by the COP26 Coalition group.

– Along with a group of other activists, Nirere Sadrach of Uganda shares footage on Twitter showing plastic waste from Coca Cola products strewn in and around Lake Victoria, saying: “Coca Cola is leading other companies in producing plastics polluting Africa’s largest fresh water body.”

– In her climate strike, Indian activist Kangujam advocates for farmers as they struggle in the face of climate change, saying on Twitter: “They’re already the victims of #ClimateCrisis.”

– Fridays for Future shows solidarity with detained environmental activist Amanda Echanis and condemns “every form of red-tagging and terrorist-tagging of environmental defenders.”

– Ugandan climate activist Nakabuye Hilda completes her 101st week of climate strike and referring to the denial of climate change she says on Twitter that tremendous pressure will definitely lead to tremendous action.

– A group of young activists gathers in Bruxelles, calling on the EU leaders to increase their ambitions towards emission reduction by 2030 and hold signs reading: “Do not compromise our future” and “Fight for 1.5° C”.

– Members of Youth Advocates for Climate Action Philippines (YACAP) hold a candle-lighting protest to commemorate the 5th anniversary of the Paris Agreement and to condemn the “ongoing attacks against environment defenders.”

– Many climate and environmentalist groups around the world including Greenpeace, Fridays for Future and 350.org mark the fifth anniversary of the Paris Agreement and stress that “1.5° C target is non-negotiable” as part of “#FightFor1Point5” campaign.