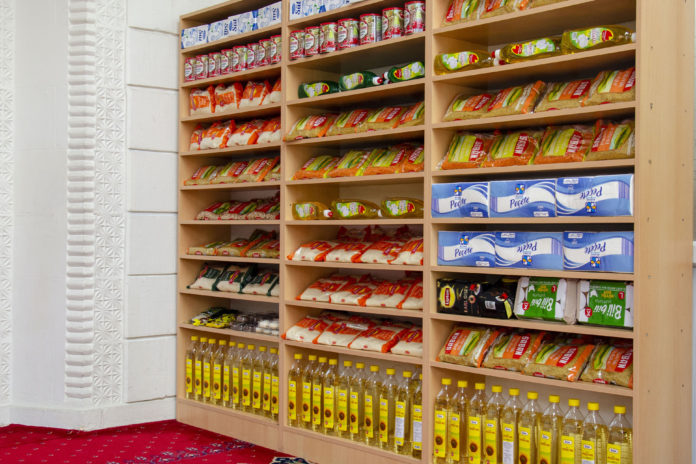 Two mosques in Turkey have converted their shoe racks to food shelves in a bid to help those in need due to the coronavirus lockdown.

The project with the theme “Give if you can, take if you need” was initiated in the central Konya province by Mevlader Foundation, Provincial Mufti’s Office and Selcuklu District Mufti’s Office.

As part of the project, Adnan Menderes and Yildirim Beyazit mosques in the Selcuklu district have opened their doors to the needy.

“Even though our mosques are open for worship, they are closed for congregational prayers,” Provincial Mufti Ahmet Pocanoglu said.

He added they are working to convert other mosques in the city into charity bazaars.

Pocanoglu also called on people to donate to help others during the holy month of Ramadan.

District Mufti Nusret Karabiber said that cash and food aid is also being dispatched. They visited 2,000 families to distribute food packages as well as 700,000 Turkish liras ($100,000).

Mevlader Foundation’s press secretary Maziyetullah Kulu Oguz said they aim to extend a helping hand to people in need through the project.

“We want this benevolence to spread to the whole province,” Oguz said, adding that they want to increase the number of mosques offering this service with the support of philanthropists.

A similar project was also put in service at an Istanbul mosque earlier in the month by the imam of that facility. The mosque opened its doors to those in need of food and basic cleaning products.

The virus, which locked people at home, first appeared in China last December and has spread to at least 185 countries and regions.

Turkey is also affected from COVID-19, the disease caused by the novel coronavirus, and registered 2,992 deaths. A total of 38,809 patients have also been discharged from hospitals after recovering from the virus.

Oil up on inventory fall, protests in US