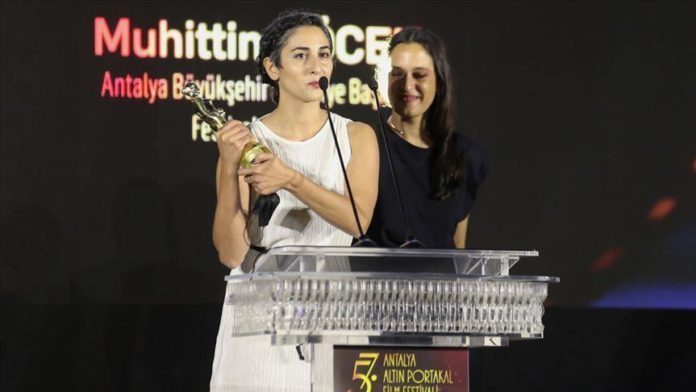 Held under strict COVID-19 measures, the closing and awards ceremony of the festival was held in an open area in the Glass Pyramid, a multi-purpose convention complex in the resort city of Antalya.

The Best Scenario Award went to Tunc Sahin, the writer of People Divide in Two; Best Director of Cinematography was Hayk Kirakosyan for his movie In the Shadows, while the Best Music award was won by Greg Dombrowsk for the same film.

Jasmila Zbanic’s Quo Vadis, Aida? was awarded the Best Film, whereas Massoud Bakhshi became the Best Director for Yalda, a Night for Forgiveness.

Natasa Stork for her role in Preparations to Be Together For an Unknown Period of Time was awarded Best Actress.

The festival, also known as Turkey’s Oscars, was organized by Antalya’s local government with the support of the Turkish Ministry of Culture and Tourism from Oct. 3-10.

While every year posters of a prominent cinema artist are featured, this time photographs of a healthcare worker, who heroically fought coronavirus, were displayed. At least 50 free entry passes for each movie were also set aside for health professionals.

While 44 films, including those competing in the festival, were shown outdoors instead of indoor theaters, seating arrangements were made while following social distancing norms. Masks were mandatory for everyone.