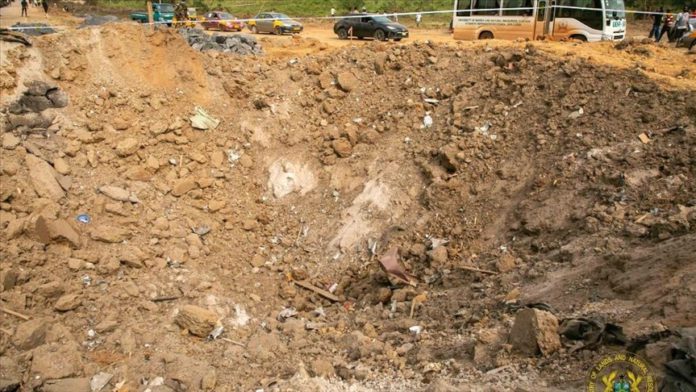 Ghana announced Tuesday that it is fining a Spanish company $6 million for an explosion last month in the small western town of Apiatse that killed 13 people and caused immense structural damage.

The move follows a report by a three-member committee set up by the Lands Ministry to investigate the tragic incident.

A press statement signed by Minister of Lands and Natural Resources Samuel Abu Jinapor said the company had breached regulatory processes, and although the penalties for the breaches pursuant of Ghana’s mining regulations ranges between $600 to $10,000, “the nature and totality of the circumstance leading to this tragic incident” forced the government to impose a hefty fine on Maxam Corp.

The license of Maxam Corp.’s Ghana branch, Maxam Ghana Limited, was terminated before the investigation commenced. According to the statement, Maxam Ghana can only get its operating license back after Maxam Corp. pays the administrative fine of $1 million out of the $6 million.

The company has 18 months to pay the remaining $5 million in instalments.

Another 14 conditions have been set by the ministry, which include the company not transporting ammonium nitrate and fuel oil on a public road to a mine or civil work site unless expressly permitted by the chief inspector of mines.

In response, Maxam denied breaching mining regulations but said it will comply with payment of the fine.

The explosion, which occurred on Jan. 20, claimed 13 lives and injured many people. A police investigation found that a vehicle carrying mining explosives owned by Maxam to a gold mine collided with a motorcycle and exploded.

“Based on a different interpretation of the applicable regulations, we believe that Maxam has not committed any of those breaches. However, to ensure the continuity of the business, to be able to supply our customers, and to protect the employment of our workers and sub-contractors, Maxam has decided to pay the fine and will comply with the measures of the Ministry of Lands and Natural Resources,” said a portion of a statement issued by Maxam Ghana Limited.

Some 750 residents, including survivors of the explosion, have been relocated to a temporary camp in the nearby town of Bogoso-Kojokrom, according to Ghana News Agency, as the government steps up efforts to reconstruct the town.

A support fund has also been set up and President Nana Akufo-Addo has donated 100,000 Ghana cedis (approximately US$15,625).

US: Weinstein could face 2nd trial in Los Angeles

‘In the name of God, go,’ embattled UK premier told in...