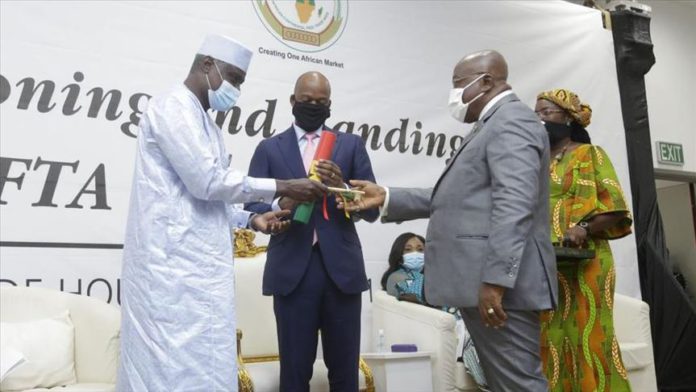 Ghana on Monday handed over a building in its capital Accra to the African Union (AU) to serve as the secretariat of the African Continental Free Trade Area (AfCFTA).

The establishment of the AfCFTA was initiated in March 2018 and the operational phase was launched in May 2019.

In July the same year, Ghana was selected to host the AfCFTA headquarters.

“I have no doubt that the coming into being of the African Continental Free Trade Area is one of the most important decisions taken by the AU,” Ghana’s President Nana Addo Dankwa Akufo-Addo said at an event attended by dignitaries including AU Commission Chairperson Moussa Faki Mahamat.

“When you consider the fact that trade between African countries remains low, currently standing at some 16% of our combined GDP, compared to other parts of the world, like the European Union’s 75%, it is obvious that these very low levels of intra-regional trade constitute one of the defining characteristics of our continuing poverty.”

He said the AfCFTA will prove pivotal in bringing prosperity to Africa and its people. “A large part of the growth and prosperity that we seek on the continent will come from us trading more among ourselves,” he said.

“[…] Through the AfCFTA, we have an opportunity to reconfigure our supply chains, to reduce reliance on others and to expedite the establishment of regional value chains that will boost intra-Africa trade and secure Africa’s productive capacity for generations to come,” he said.