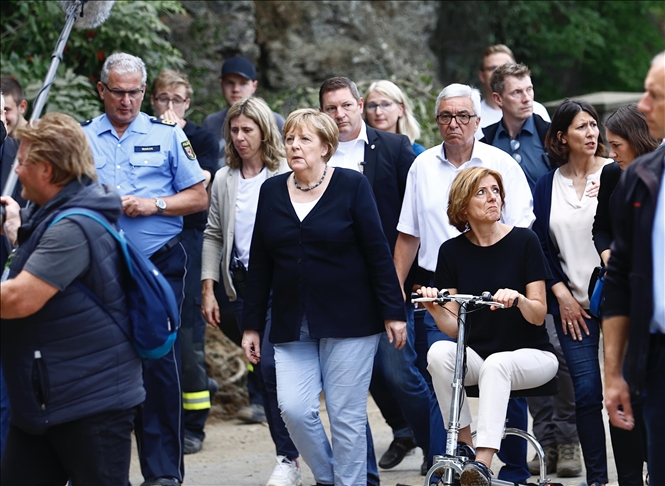 BERLIN (AA) – German Chancellor Angela Merkel on Sunday toured flood-ravaged areas in western and southwestern Germany, expressing her deep shock and sadness over the widespread destruction of the catastrophe.

Speaking to reporters in the southwestern town of Schuld, a visibly emotional Merkel said: “I came here today to make it clear that we on the federal (government) side get a real picture of the surreal, ghostly situation. It’s frightening, I almost want to say that the German language hardly knows any words for the devastation that has been wrought.”

“We see the force with which nature can act. Nevertheless, the people are full of hope, full of will,” added Merkel, who vowed to provide quick financial aid for people affected by the disastrous flood.

Search-and-rescue missions are continuing in the flood-hit areas, as at least 157 people were killed so far and hundreds are still missing, authorities said on Sunday.

On Saturday, heavy rains hit the eastern state of Saxony and the Upper Bavaria region, forcing the evacuation of hundreds of residents. At least one person was killed in the flooded area, local media reported.

German public television network ARD has also kicked off a donation campaign to raise money for the victims of the historic floods.

At least 24 soldiers killed in attack in northern Mali