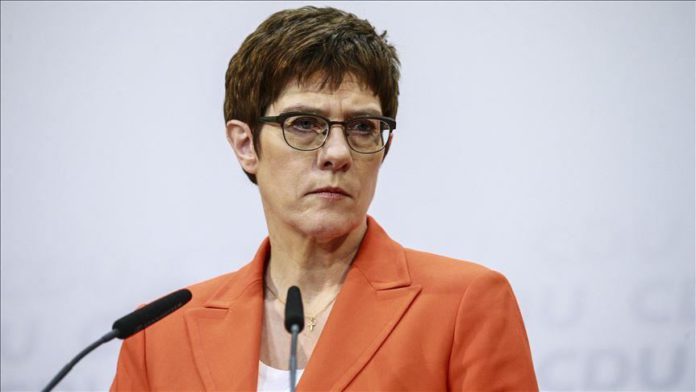 Germany on Tuesday criticized French President Emmanuel Macron’s suggestion that European nations show greater independence from the US and NATO.

Defense Minister Annegret Kramp-Karrenbauer criticized Macron’s vision during a speech at a military university in Hamburg.

“The idea of European strategic autonomy goes too far if it nurtures the illusion that we could ensure Europe’s security, stability and prosperity without NATO and the U.S.,” she said.

Kramp-Karrenbauer, a close ally of Chancellor Angela Merkel, said Europe should assume more responsibility on defense matters, but stressed the US and NATO remains vital for Europe’s security.

“Without the nuclear and conventional capabilities of the Americans, Germany and Europe cannot defend themselves. These are the hard facts,” she said.

Kramp-Karrenbauer argued that even if Europeans would take full responsibility, with significant increases in defense expenditures, they would still need decades to compensate for military capabilities offered by the US through NATO.

“It is particularly important for us to see the Americans continue to show an interest in Europe’s defense, while their strategic focus is shifting towards Asia,” she added.

The defense chief also expressed hope that after the election of Joe Biden as US president, the new American administration might reverse Donald Trump’s decision to withdraw troops from Europe.

Kramp-Karrenbauer’s remarks came one day after Macron openly criticized her for “misinterpreting history,” for remarks advocating closer cooperation between Europe and the US on defense and security matters.

Macron, who has long championed the view of “European strategic autonomy” urged European nations to take further steps to strengthen the continent’s independence in all areas.

“The United States will only respect us as allies if we are earnest, and if we are sovereign with respect to our defense,” he said Monday to the French journal Le Grand Continent. ​​​​​​​