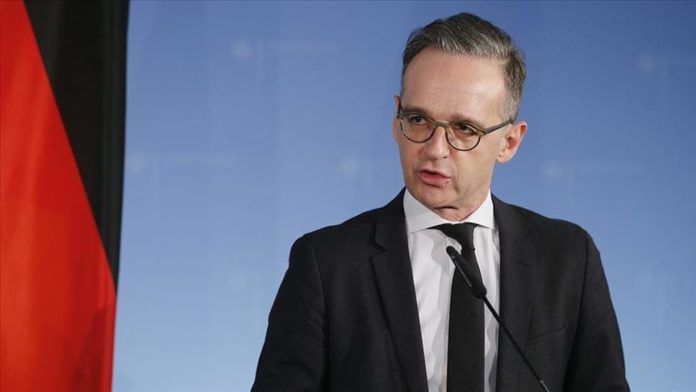 German Foreign Minister Heiko Maas on Monday said the UN Security Council is “on the verge of paralysis” as the country prepares to take on the one-month term presidency.

In an interview with German Press Agency (DPA), Maas said even on important issues such as the Syrian conflict or COVID-19 pandemic the Security Council cannot reach a common position due to disagreements and tensions between permanent members.

Maas urged the US and China to put aside their differences, adding that the silence of the Security Council amid a pandemic cannot be accepted.

“We want to make another attempt to reach a common position on the coronavirus pandemic,” he said.

Maas acknowledged that recent tensions between the US and Germany were not only because of President Donald Trump, and reflected deeper changes in international arena.

“Anyone who thinks that having a Democrat in office would reinstate the trans-Atlantic partnership to what it was before is underestimating the structural changes,” said Maas.

“The trans-Atlantic partnership is extremely important, will remain important, and we are working to secure its future. But in its current form, it no longer meets the demands that both sides have of it.”

The main disagreement between the US and Germany raised from the issues of Nord Stream 2 pipeline and NATO defense spending.

The Nord Stream 2, an extension of the first Nord Stream pipeline, spearheaded by Russia’s Gazprom, is nearing completion and has the same annual capacity, running almost parallel to the first pipeline route. Together they will meet the annual gas demands of a quarter of the European continent.

However, some European nations expressed their opposition to the project, arguing that it would increase the EU’s dependence on Russian gas while urging that Europe instead focus on diversifying its energy resources.

The US administration has been targeting Germany to abandon the project, also threatening sanctions on companies working for the gas pipeline.

Trump has long called for NATO members, including Germany, to fulfill their obligation to spend 2% of their GDP on defense. Just nine of the alliance’s 28 member-states have met the threshold, according to NATO’s latest data, which was released in November.

The US president recently confirmed plans to withdraw 9,500 troops from bases in Germany, saying Berlin should up its defense spending.

“They’re delinquent of billions of dollars and this is for years,” Trump said during a roundtable discussion at the White House earlier this month. “So, we are putting the number down to 25,000 soldiers, we’ll see what happens. But Germany has not been making payment.”

Speaking to leading European newspapers this weekend, German Chancellor Angela Merkel said they are aware that they should spend more on defense.

“We in Germany know that we have to spend more on defense; we have achieved considerable increases in recent years, and we will continue on that path to enhance our military capabilities,” she said.

“American troops in Germany help to protect not only Germany and the European part of NATO but also the interests of the United States of America,” she added.

Trump: US won't pay for security of Prince Harry, wife