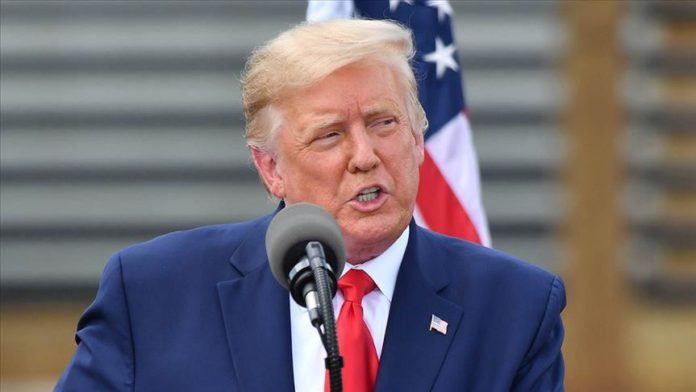 US President Donald Trump Monday said he would support Germany pulling out of a pipeline project with Russia over the alleged poisoning of a critic of Moscow, but claimed Berlin may be too “weakened” in terms of energy security to do so.

Asked about the subject after a US Labor Day press conference, Trump said his administration has long advised NATO member Germany against the Nord Stream 2 pipeline deal with Russia, adding that Germany is already too dependent on Russian energy.

”Absolutely,” Trump said, indicating his support for a potential German withdrawal from the massive energy deal with Russia.

Touching on a favorite subject, he said NATO exists to supposedly protect Europe from Russia but Germany paid billions of dollars to the country at a time when it is “delinquent” with its annual dues to the alliance.

Countries along the construction route, including Germany, Finland and Sweden, have already granted permits, and Denmark, which originally expressed opposition to the project, agreed to a permit last year.

Calls to withdraw from the project gained new momentum after Alexey Navalny, 44, a fierce critic of Russian President Vladimir Putin, felt sick on Aug. 20. After two days in a Russian hospital, he was sent to Berlin for treatment.

German tests found that “a chemical nerve agent from the Novichok party” – linked to other Russia attacks – was found to have poisoned Navalny.

On Sunday German Foreign Minister Heiko Maas told weekly newspaper Bild am Sonntag: ”I hope the Russians won’t force us to change our position regarding the Nord Stream 2. If there won’t be any contributions from the Russian side regarding the investigation in the coming days, we will have to consult with our partners.”

Russian authorities deny any involvement in the case. Navalny was brought out of a medically induced coma and taken off his ventilator on Monday, but his future is uncertain.

Trump on Saturday said there is ”no proof” Navalny was poisoned, despite a statement to the contrary from US Secretary of State Mike Pompeo earlier.

“The United States is deeply concerned by reported preliminary conclusions from German medical experts that Russian opposition activist Aleksey Navalny was poisoned,” Pompeo said. “If the reports prove accurate, the United States supports the EU’s call for a comprehensive investigation and stands ready to assist in that effort.”

After London concluded Novichok was used in a 2018 attack on former Russian spy Sergei Skripal and his daughter in the British town of Salisbury, Trump similarly downplayed any responsibility or consequences for Russia over the alleged poisoning.