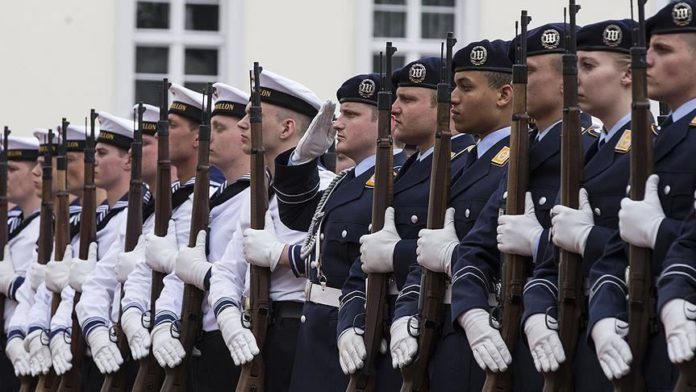 Germany’s elite KSK (Kommando Spezialkraefte) special forces have been rocked by a series of far-right scandals over the past three years, with authorities continuing efforts for reform.

The recent discovery of ammunition and weapons on the private property of a KSK commando soldier led Defense Minister Annegret Kramp-Karrenbauer to warn that patience was running out.

The minister stressed that the planned revamping of the KSK unit should not be understood as punishment, but as “probation.”

Warning of a “toxic leadership culture” within the KSK anti-terror troops, the minister said the dissolution of the army unit and formation of a new special force were on the table should reform efforts fail to yield results by Oct. 31.

The minister vowed a “zero-tolerance policy” towards all kinds of extremism as the country grapples with a dramatic rise in right-wing extremist attacks.

Kramp-Karrenbauer’s clampdown on right-wing extremist tendencies in the military were also in response to a letter by a KSK officer who urged the minister to intervene in the matter, accusing instructors and senior commandos in the unit of cultivating a “toxic culture of acceptance” whereby complaints about far-right influence were being suppressed.

As part of Kramp-Karrenbauer’s reform plans, KSK operations will be transferred to other units as far as possible and the elite troopers will not participate for the time being in international military exercises and missions.

The revelations came in the wake of a recent cabinet decision to amend the country’s Military Act, making it easier to fire soldiers disciplined for extremism or other serious misconduct.

The changes were made in reaction to a lengthy spate of largely far-right incidents involving military personnel.

The new Parliamentary Commissioner for the Armed Forces, Eva Hoegl echoed Kramp-Karrenbauer’s concerns on the issue.

“There are also structures and networks within the Bundeswehr [Germany’s armed forces], which are extreme right[-wing], where there are racist attacks. First of all, that has to be thoroughly looked into and secondly, action must also be taken swiftly.”

Meanwhile, the head of opposition party The Left’s parliamentary group, Dietmar Bartsch said: “Right-wing extremist ideas and right-wing terrorist fantasies of violence in the Bundeswehr are not causally linked to the end of compulsory military service, but rather with a culture in the Bundeswehr that has allowed and tolerated this for decades.”

Bartsch was referring to reports already existing in the late 1990s of extreme right-wing incidents within the KSK.

In one case, three non-commissioned officers performed the Hitler salute at a graduation ceremony. The incident took place before the KSK was founded, but remained unnoticed for many years.

In April 2017, soldiers at a farewell party for a KSK commander allegedly threw pig heads, played neo-Nazi rock music and made the Nazi salute, which is outlawed in Germany.

Established in 1996, the KSK’s image was further tarnished in 2003 when its then-commander was forced into early retirement after being accused of having close ties to right-wing extremists — links that have continued to dog the elite force’s reputation to this day.

Germany’s Military Counterintelligence Service (MAD) suspects that there are at least 500 far-right extremists in the country’s armed forces.

German authorities have stepped up their efforts to stamp out extremism in the ranks, adding 90 new staff members last year to the MAD, which performs security clearances and investigates political extremism in the armed forces.

Under new rules, each new applicant has to undergo a security clearance before assuming any post. The objective is to keep extremists out of the military.

The efforts by the German military to stem the rising tide of right-wing extremists among its ranks coincides with mounting cases of far-right terrorism in the country, fueled by the propaganda of far-right, anti-Semitic and anti-Muslim groups, including the main opposition party Alternative for Germany (AfD).

Last year, far-right extremists killed a pro-refugee politician in the central city of Kassel and attacked a synagogue in the eastern city of Halle, raising alarm bells over extreme right-wing terrorism in the country.

In February, a far-right extremist attacked two cafes in the southern city of Hanau, killing nine people with migrant backgrounds.

“The number of crimes, the number of relatives, the number of violence-prone right-wing extremists have continued to increase,” he said, adding that “never before” had a federal government identified this threat situation so “clearly and unambiguously.”

Germany’s domestic intelligence agency, Verfassungsschutz (The Office for the Protection of the Constitution) reported 32,080 people in 2019 as having “right-wing extremist potential” compared to 24,100 in the previous year.

Around 13,000 out of the 32,080 right-wing extremists are viewed as being ready to commit violent acts, according to the Verfassungsschutz.

Projects in Somalia based on win-win development: Turkish state agency