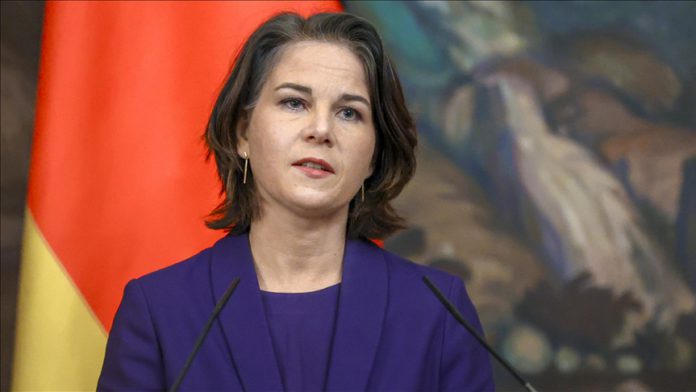 Germany’s foreign minister has urged Moscow on Monday to take steps to de-escalate tensions, and warned that Russia will face severe political and economic sanctions if it attacks Ukraine.

“We will respond with tough, very specific measures to any further aggression by Russia,” Annalena Baerbock said in a statement.

She made the remarks ahead of her official talks in the Ukrainian capital of Kyiv, amid heightened tensions with Russia.

Baerbock reaffirmed Germany’s strong support to the sovereignty and independence of Ukraine.

“As a partner of Ukraine in the EU, NATO and the G7, we categorically support the territorial integrity of the country and stand alongside the people,” she stressed.

The top German diplomat is in Kyiv for her second visit within a month to demonstrate solidarity with Ukraine. She is also scheduled to travel to the “contact line” in eastern Ukraine to gain a first-hand impression of the situation.

Germany is among the largest donor countries to Ukraine and provided nearly €1.83 billion ($2.09 billion) in development aid since 2014, according to government figures.

But Germany’s opposition to military support to Ukraine remains a source of friction and has been widely criticized by Ukrainian politicians.

Berlin has so far turned down Ukraine’s requests for weapons pointing to the country’s restrictive arms export policy, and arguing that this could further escalate military tensions in the region.

Russia recently amassed more than 100,000 troops near Ukraine, prompting fears that the Kremlin could be planning another military offensive against its ex-Soviet neighbor.

Kremlin also issued a list of security demands from the West, including a rolling back of troop deployment to some ex-Soviet states, and guarantees that Ukraine and Georgia will not join NATO.

Last month, NATO Secretary-General Jens Stoltenberg said that allies are ready to meet with Russia to address issues raised by Moscow, but also underlined that NATO “will not compromise on the fundamental principles on which Euro-Atlantic security rests.”