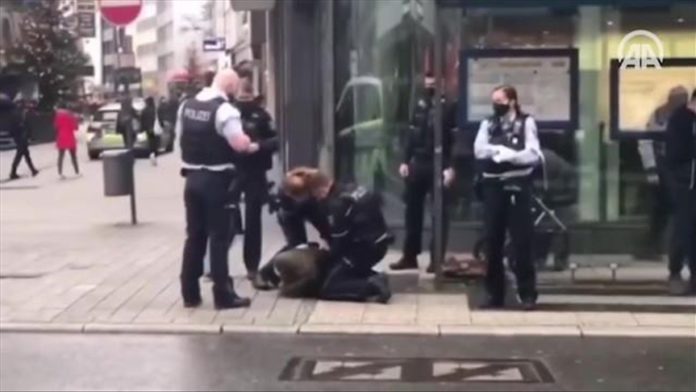 Police in a Western German city handcuffed a woman in a Muslim headscarf in front of her toddler and put her on the ground for not wearing a mask, as seen in video that recently went viral.

According to the video taken by eyewitnesses in the city of Wuppertal, there were seven police officers outside of the building the woman left after visiting the dentist.

The video shows two police officers handcuffing the woman in front of her toddler, putting her on the ground, and pressing on her body while she screams for help.

When police tried to stop bystanders from filming, one said: “You have no right to stop me from shooting this video. The phone is mine. I can give my lawyer’s number.”

The video also shows a staffer from the dentist’s office seeing the scene while leaving the office, saying that what the police are doing is a crime.

As bystanders in the video make their opposition to the scene clear, the police remove the woman’s handcuffs and release her and leave as if nothing happened.

According to information obtained by Anadolu Agency, the woman seen handcuffed in the video was born in Germany and converted to Islam.

The woman, evidently shocked by the incident, is reportedly set to file a criminal complaint against the police.