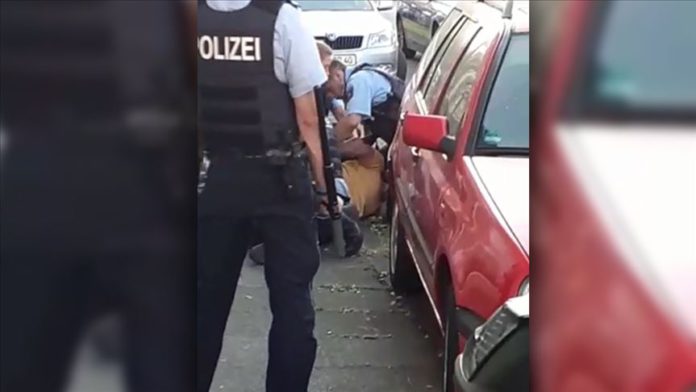 A video of a police officer in the city of Dusseldorf placing his knee on a young man’s neck caused outrage in Germany, as many likened it to the case of George Floyd, a 46-year-old African American man who died on May 25 after a police officer similarly knelt on his neck.

The 15-second video last Saturday showed a police officer — along with two other police officers standing by — placing his knee on a suspect’s neck as people at the scene shouted at the police to release him. Authorities said the incident of possible police misconduct was being investigated.

Meanwhile, a similar video was recorded in the city of Mulheim an der Ruhr on Aug. 8, with the victims being a Turkish son and father, who recently filed a complaint for being subjected to police violence.

Speaking to Anadolu Agency, Fatma Gok said the police were called due to faulty parking. Gok said: “A truck has come to tow away the car. But my husband was trying to persuade them to leave the car, saying that he would pay the penalty. The driver said it was okay. But, meanwhile, two police officers were arguing with my two sons.” Gok recounted that the officers laid her husband and one of her sons on the ground and placed their knees on their neck for almost ten minutes.

“Remembering the Goerge Floyd incident, I yelled at the police, saying ‘you’ll kill my son!'” Gok also thanked officials from the Turkish Consulate-General who had come to visit them after the incident.

“This kind of violence and treatment is unacceptable,” she said on the incident, adding they had filed a complaint against the police officers.

* Writing and contributions by Iclal Turan in Ankara