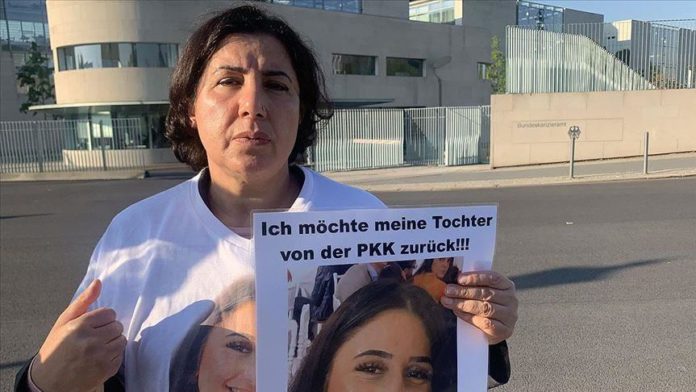 A German-Turkish woman on Wednesday continued her protest in Berlin to demand the return of her daughter after being forcibly recruited by PKK terrorists.

Maide T., the mother of Nilufer T., and a group of supporters gathered in front of the Prime Ministry ahead of a Cabinet meeting chaired by Chancellor Angela Merkel.

Maide T. said in a statement: “The PKK not only takes people’s lives but also their money.”

She said she had also met some women in Diyarbakir, southeastern Turkey, who have been staging a sit-in against the PKK terror group for more than a year, demanding the return of their children.

“We’re on the same ship. We’re talking about our problems. We stand shoulder-to-shoulder in a spiritual way,” she said.

The mother carried a banner, reading: “The PKK is a virus. Help me save my child.”

Turkey has long criticized German authorities for not taking serious measures against the PKK, which uses the country as a platform for their recruitment, fundraising, and propaganda activities.

In its more than 30-year terror campaign against Turkey, the PKK – listed as a terrorist organization by Turkey, the US, and EU – has been responsible for the deaths of 40,000 people, including women, infants, and children.