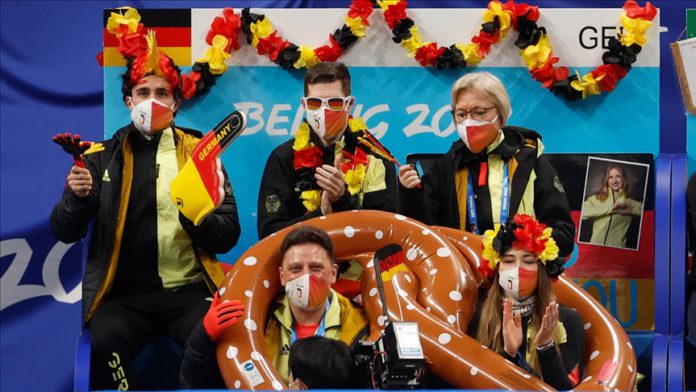 Germany has reached the top of the 2022 Winter Olympics medal count with multiple medals they won on Wednesday.

In the luge discipline, Germany bagged a gold and silver medal in Beijing.

Tobias Wendl and Tobias Arlt won the doubles run 2 with the time of 1:56:554 at Yanqing National Sliding Centre to win the Olympic gold.

Their compatriots Toni Eggert and Sascha Benecken came second with 1:56:653 to be awarded with the silver medal.

Thomas Steu and Lorenz Koller were third in the doubles run 2 as the Austrian pair were 0.5 seconds behind Eggert and Benecken to have a bronze medal.

Separately, German athlete Vinzenz Geiger was the victor in the Nordic combined event.

Geiger completed the Individual Gundersen Normal Hill/10km, Cross-Country with the time of 25:07:7 to win an Olympic gold at Zhangjiakou National Cross-Country Skiing Center.

Joergen Graabak of Norway ended it 0.8 seconds behind Geiger to claim a silver medal.

Austria’s Lukas Greiderer finished in 25:14:3 to be a bronze medalist in Beijing.

Germany are leading the Beijing 2022 with eight medals including five gold.

In addition, Germans have so far taken three silver medals in the Chinese capital.

Sweden are currently in the third position with seven medals. They bagged four gold medals to follow Norway in the medal rankings.

US’ Jacobellis victorious in women’s snowboard

Jacobellis, 36, beat France’s Chloe Trespeuch to bring the first gold medal to the US in the 2022 Winter Olympics.

Trespeuch was awarded with a silver medal.

Canadian national Meryeta O’Dine was a bronze medalist in the women’s snowboard.

The US are in the 10th spot in the Beijing 2022 medal rankings with seven medals; one gold, five silver, and one bronze.

The Danish ice hockey team had their first ever Olympic victory in men’s category, beating the Czech Republic 2-1 in Beijing.

Markus Lauridsen and Frans Nielsen were the scorers for Denmark in a preliminary round Group B match at National Indoor Stadium.

Denmark have three points to lead the Group B.

The Czech Republic are in the third position with zero points in this group.

In another Group B match, the Russian Olympic Committee (ROC) won against Switzerland 1-0 as left winger Anton Slepyshev scored the winning goal for his nation.

The ROC have three points to be second in the group. Meanwhile, Switzerland come last.

The Olympic Winter Games will go through Feb. 20.