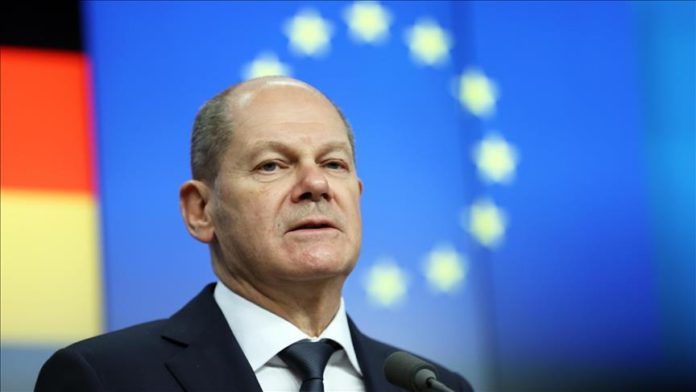 Germany has been involved in “intensive talks” with Russia on the Ukraine issue since the beginning of January, the German chancellor said on Wednesday.

Berlin’s engagement with Russia is part of its commitment to Ukraine’s territorial integrity and peace in Europe, Olaf Scholz said in a virtual address to the World Economic Forum.

“After years of rising tensions, silence is not a reasonable option,” he said, stressing that Ukraine’s borders “must not be moved by force.”

Scholz, who took over as chancellor from Angela Merkel in December, said his first weeks in office have “urgently reminded us of the critical importance of international cooperation, political exchange and dialogue.”

Despite Germany’s continuous engagement with Russia, he said, it is “still too early to tell whether we have de-escalated a situation Russia created by concentrating 100,000 troops along the Ukrainian border.”

“That is why we are talking in a range of different formats about our commitment to Ukraine’s territorial integrity and about a key principle of our common European peace order – that borders must not be moved by force and that right makes might, not the other way around,” said Scholz.

The German leader’s comments came as US Secretary of State Antony Blinken was traversing European countries for talks on the Ukraine issue, which will culminate in a meeting with Russian Foreign Minister Sergey Lavrov in Geneva on Friday.

“Germany has taken this stance because it strongly believes that the greater global good can only be ensured through international cooperation, and that peace is most important along with global health,” said Scholz.

He cited as an example Ugur Sahin and Ozlem Tureci, the Turkish-German cofounders of pharma firm BioNTech who developed a COVID-19 vaccine that has “saved millions of lives worldwide.”

“These examples are proof of the power of cooperation,” said Scholz.

Speaking about the coronavirus pandemic, the German leader warned that the world “will run out of letters in the Greek alphabet for new variants” unless there is “a genuinely global” vaccination campaign.

Scholz said Germany is the second-largest donor to COVAX, the UN-backed global initiative for equitable provision of coronavirus vaccines, and is “determined to reach 70% of the world population” by mid-2022.

As current chair of the G7, he said, Germany will “focus on improving the international health infrastructure, including in countries of the Global South, but needs partners, particularly in the private sector.”

“That is why Europe has decided to become the first carbon-neutral continent by 2050. Germany wants to reach that goal in 2045,” he added.

“This leaves us with less than 25 years to reach net zero, a monumental task.”