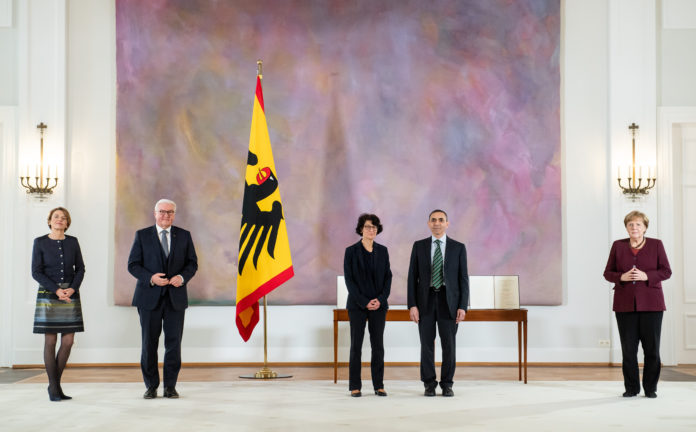 Frank-Walter Steinmeier presented the Order of Merit to Sahin and Tureci at a ceremony held at the Bellevue Palace, which was also attended by Chancellor Angela Merkel.

“On behalf of our country, I would like to thank you both for your outstanding scientific achievements, and I wish that your further major research plans would bring about similar groundbreaking successes for you and for all of us,” Steinmeier said at the ceremony.

He underlined that Sahin and his wife Tureci’s pioneering work in the field of mRNA technologies, and their development of the coronavirus vaccine against in less than a year, made a decisive contribution to containing the pandemic.

“Your groundbreaking discovery is saving human lives, it is securing the necessities of life, ensuring our social, economic and cultural survival. With every vaccinated person we can take a small step towards normalization, a step towards the life we miss and the people we love,” he said.

The Great Cross with Star of the Order of Merit, which was given to the Turkish-German scientist couple, is one of the country’s most prominent honors to pay tribute to the individuals for their great services to the nation.

Both Sahin and Tureci were born to immigrant parents from Turkey who moved to Germany in the 1960s, and after studying medicine at the university, they have built successful careers in the fields of cancer immunology, molecular biology and the mRNA vaccine technology.

The pharmaceutical company BioNTech, which the couple founded in 2008, managed to develop the world’s first effective coronavirus vaccine together with its US partner Pfizer.

Armin Laschet, the leader of Germany’s governing party Christian Democratic Union (CDU),  praised the scientists for their great achievements in a message he posted on Twitter.

Condemning far-right propaganda against the country’s immigrant population, Laschet underlined the valuable contributions of immigrants to the country.

“Sahin’s father was seen as a ‘guest worker’ by many, they wanted to send him back to Turkey. It’s good that we’re a country of immigration, it’s good that he stayed here, and his son made a career by studying here,” he said.

European Commission President Ursula von der Leyen also congratulated the couple for receiving the Order of Merit of Germany, and said they have become role models for many people.

“Europe can consider itself lucky, as it greatly benefited from the vision of Ozlem Tureci and Ugur Sahin in fight against the virus,” she said on Twitter.