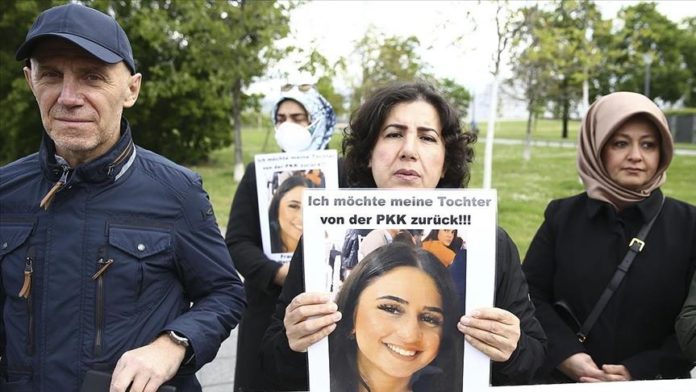 A German-Turkish woman continued her protest in front of the German Chancellery on Wednesday to raise awareness about the PKK terror group’s forced recruitment of minors.

Maide T., who is seeking help from the German government to rescue her daughter, opened a banner that read: “PKK is a virus. Help me save my child,” as she carried a photograph of her daughter.

She said she had a sad Muslim holiday of Eid al-Adha. “We do not have a holiday anyway. These days are very emotional. Because you cannot see your child with you on special days such as Mother’s Day, holidays and New Year’s Eve. This is a much greater pain,” she said.

The three-day holiday commemorates the willingness of the Prophet Ibrahim, or Abraham, to sacrifice his son at God’s command before the last-minute divine substitute of a ram.

She also reiterated her encouragement to her daughter to return home.

Her daughter, Nilufer T., has been missing since leaving for school in November 2019, according to Maide T.

She was influenced by the propaganda of the PKK after visiting a cultural center in the capital Berlin, which was used by the terror group to brainwash minors and recruitment purposes.

The PKK has been classified as an “ethnic-nationalist” and “separatist” terror organization by the EU’s law enforcement agency, EUROPOL, and has been banned in Germany since 1993.

But it remains active in the country, with nearly 14,500 followers.

Turkey has long criticized German authorities for not taking serious measures against the PKK, which uses Germany as a platform for recruitment, fundraising, and propaganda activities.

In its more than 35-year terror campaign against Turkey, the PKK – listed as a terrorist organization by Turkey, the US, and EU – has been responsible for the deaths of 40,000 people, including women, infants, and children.