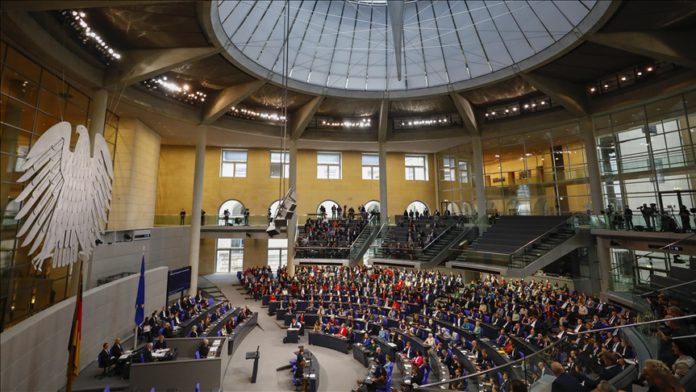 A German conservative lawmaker on Thursday criticized his country’s government for its decision to send 5,000 helmets to Ukraine, while rejecting Kyiv’s request for defensive weapons to deter Russia from further aggression.

“This has been really shameful,” Florian Hahn, a lawmaker from the Christian Social Union (CSU) said at parliament during a general debate on Germany’s policy toward Ukraine, and recent tensions with Russia.

“The government’s idea that it could address growing expectations from Germany, and demonstrate its support to Ukraine by shipping 5,000 helmets to this country, has been a big mistake,” he said.

Hahn said there has been exceptions to this, as Germany shipped arms to Iraqi government and Kurdish groups in 2014, when they faced with a serious threat from the Daesh/ISIS terror group.

“People in Ukraine are expecting support from us. It’s very important to send the right signal now, showing that Europe and the Western world stand in solidarity with Ukraine,” he said.

Hahn said Germany should continue its efforts for a diplomatic solution, but also keep the option of arms deliveries to Ukraine open, in order to increase pressure on Moscow.

The Ukrainian government has repeatedly asked for stronger support from Germany to strengthen the country’s defense capabilities, but Berlin has turned down these requests, arguing that it could escalate military tensions and undermine ongoing diplomatic efforts.

Germany also remained reluctant to block the controversial Nord Stream 2 gas pipeline, although the US administration and NATO’s eastern members called on Berlin to take a harsher stance.

Under pressure, German Chancellor Olaf Scholz said last week that everything will be up for discussion, including the Nord Stream 2 gas pipeline, if Russia takes further aggressive action against Ukraine.

The EU’s biggest economy is heavily dependent on Russian gas and oil, and the country’s plan to phase out nuclear power has further increased its dependence. Germany imports nearly 55% of its gas, and about 42% of its oil from Russia.