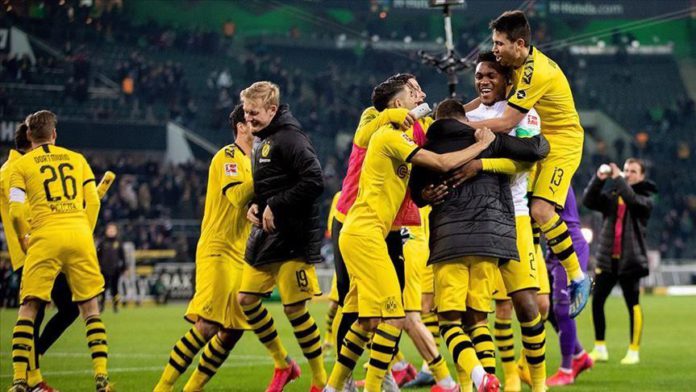 Football season in Germany is set to resume on Saturday after a two-month break due to the coronavirus pandemic.

The week 26 in top-tier Bundesliga will see a derby between Borussia Dortmund and Schalke 04 at Signal Iduna Park, Dortmund.

Last week the German Football League (DFL) confirmed that Bundesliga and 2. Bundesliga will resume on May 16.

Bundesliga is the first European football league to restart during the ongoing pandemic.

Seifert also said that everybody is responsible to take precautions not to get infected with the coronavirus and expects everyone to fulfill this responsibility.

Teams will play matches in empty stadiums as Borussia Dortmund will be surely lacking their famous Yellow Wall in Saturday’s derby.

Known for their passion and noise, the Yellow Wall is a loyal and fiery fan group of Borussia Dortmund, who supports their team behind the goal.

Football players, substitutes, the technical and medical staff of teams, referees and photojournalists are the only people allowed to access the pitch.

Club executives, firefighters and police forces, stadium security personnel and journalists are expected to be in the stands.

As part of the coronavirus measures, teams are not allowed to get their photos taken before the kickoff.

In addition, there will be no ceremony before the matches and no handshakes before and after sessions to minimize risks.

There will be other strict implementations such as keeping social distance in substitutes bench.

If the players and technical staff including head coaches do not follow social distance rules on the bench, they should wear masks as other employees in charge do.

Media rooms to be closed

Players can’t attend to the mix-zone or press rooms, where they normally talk to media as these places will be closed.

Meanwhile, head coaches will do their post-match interviews by videoconference.

The home team and visitors’ dressing rooms and match balls will be perpetually disinfected.

No physical contacts in goal celebrations

A famous German sports magazine, Kicker said that DFL previously told clubs in a written document that players should limit their goal celebrations as the football body let players do elbow bumps or foot taps.

So they cannot hug, do handshakes, high five gestures or perform group celebrations after scoring goals.

Defending German champions Bayern Munich topped the league table with 55 points when Bundesliga were put on hold in March.

Second-placed Borussia Dortmund were chasing the leaders with 51 points.

RB Leipzig were the other title contenders as they came third with 50 points in standings.

Dortmund’s rivals Schalke were far from the league’s top, being in the sixth spot with 37 points.

Fixtures of the 26th week in Bundesliga are as follows: