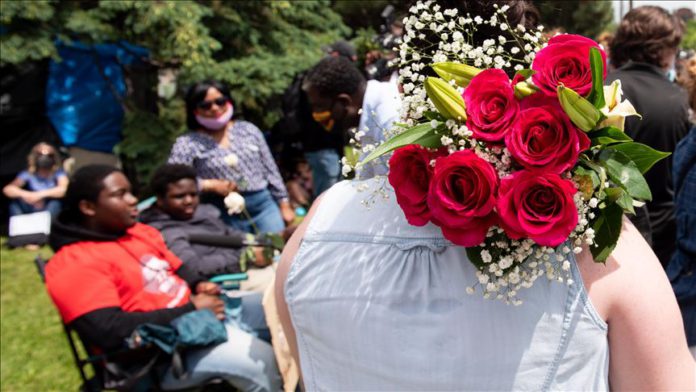 Hundreds of mourners gathered Monday in Houston, Texas for George Floyd’s final public viewing, two weeks after he was killed in police custody.

A six-hour service is ongoing at the Fountain of Praise Church in Houston, where Floyd was raised.

“This is the most horrific tragedy I have ever personally observed. But George Floyd is going to change the arc of the future of the United States,” Abbott told reporters outside the church.

“George Floyd has not died in vain. His life will be a living legacy about the way that America and Texas respond to this tragedy.”

Abbott stressed that he is committed to working with Floyd’s family to ensure that nothing like this ever occurs in the state of Texas.

“He listened, heard their pain, and shared in their woe,” the Floyd family’s attorney, Benjamin Crump, said on Twitter. “That compassion meant the world to this grieving family.”

An independent autopsy found that Floyd was killed by “asphyxiation from sustained pressure.”

Chauvin made his initial court appearance Monday on charges of second-degree murder and manslaughter.

Judge Jeannice Reding set his bail at $1 million with conditions or $1.25 million without them. The conditions reportedly cover a wide set of activities including requiring the former officer to appear at all additional court sessions, not working in security or law enforcement and not being in possession of a firearm.

Chauvin is next expected in court on June 29.

Three other officers at the scene when Floyd was arrested — Tou Thao, J. Alexander Kueng and Thomas Lane — were charged with aiding and abetting.

Floyd’s high school will hold a vigil tonight at 8:30 p.m. (0400 GMT), according to a statement posted by the Jack Yates National Alumni Association on Facebook.

His funeral is scheduled for 11 a.m. (1600 GMT) Tuesday. It will be private and limited to Floyd’s family and friends.