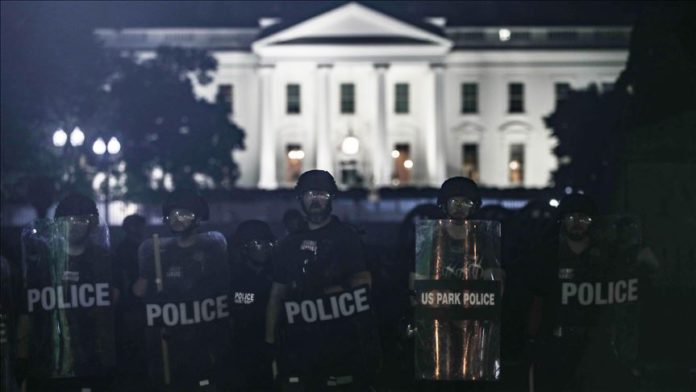 Protests continued in the US capital for a fourth day Monday over the death of George Floyd, with demonstrators flocking to Lafayette Park across from the White House in response to police violence.

Ahead of President Donald Trump’s press briefing at the White House, police used tear gas and flash bangs to disperse protestors behind a security barricade at the focal point in the capital.

Intermittent clashes occurred between law enforcers and the protestors.

On Sunday, a group of people looted several businesses and caused damage in the late hours, yet again defying a curfew.

One of the officers, Derek Chauvin, pinned him to the ground and kneeled on his neck for nearly nine minutes.

Despite curfews in major US cities, demonstrators took to the streets for a seventh day of protests Monday.

Trump said Monday he is mobilizing all federal and local civilian and military resources in response to week-long violent protests.

Speaking at the White House, he described the looting and vandalism during the protests as “domestic terror” and said he has asked every governor to deploy the National Guard “in sufficient numbers that we ‘dominate’ the streets.”