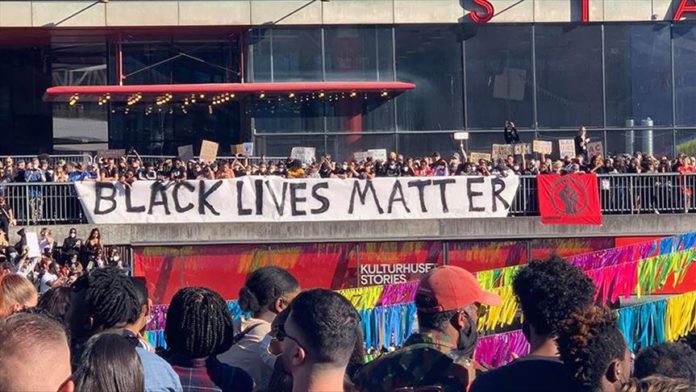 Thousands took to the streets across major European cities this week, including London, Amsterdam and Stockholm, calling for an end to police brutality and racism at home and abroad.

The protests broke out over the death of George Floyd, an unarmed black man who died on May 25 after being pinned down by a white police officer in the US state of Minnesota.

His last words were “I can’t breathe,” which became the slogan of the worldwide protests.

The EU said it was “shocked and appalled” by the killing of George Floyd, whose death represents an abuse of power, EU foreign policy chief Josep Borrell told a news conference on Tuesday.

The protesters then marched through Westminster, where the UK parliament is located and arrived near 10 Downing Street, where some clashed with police.

“Black lives matter,” “We will not be silent” and “No justice, no peace,” reverberated as they marched through the streets.

Further protests are expected on the next few days in front of parliament and the US Embassy in London.

A similar protest was staged in central Stockholm, the capital of Sweden, on Wednesday evening as huge crowds gathered in Sergels Torg, a large square by the city’s central train station.

Tensions ran high with police as the crowds chanted, “No racists on our streets,” and “I can’t breathe,” due to coronavirus restrictions and a ban on public gatherings over 50 people.

Police spokesperson Mats Eriksson said that though the protests were generally calm, two people had been arrested for violent behavior, as news website the Local reported.

Protesters later divided into smaller groups, marching through other parts of the city.

Thousands of people gathered along the Erasmus Bridge in Rotterdam, the second-largest city in the Netherlands, in protest of racism and police violence.

Due to the difficulty of following social distancing rules introduced to slow the spread of the novel coronavirus, the 5,000-person demonstration was ended earlier than planned, Mayor Ahmed Aboutaleb said in an interview with public broadcast channel RTV Rijmond.

In Athens, the capital of Greece, approximately 3,000 people gathered in Syntagma Square and marched through the city to the US Embassy, chanting slogans condemning police violence.

Marchers recited slogans heard across other protests in the world, “I can’t breathe” and “Black Lives Matter.”

Clashes broke out between police and demonstrators as they arrived in front of the US embassy.

A number of masked protesters pelted police with stones and petrol bombs, with security forces responding with tear gas and stun grenades.

Seven people have been arrested in the protests so far.

Thousands gathered in Paris on Tuesday to commemorate Adama Traore, who died in police custody in 2016.

Protesters have likened Traore’s death to that of George Floyd and have clashed with police, who responded with tear gas.

Police sources estimate that around 20,000 people took part in the gathering.

Berlin, the capital of Germany, also saw large crowds gather in front of the US embassy over the weekend.

George Floyd died on May 25 after since-fired Minneapolis police officer Derek Chauvin pinned his neck to the ground for nearly nine minutes, despite Floyd’s repeated pleas that he could not breathe.

Europe mulls action vs Turkey over reopening of Maras