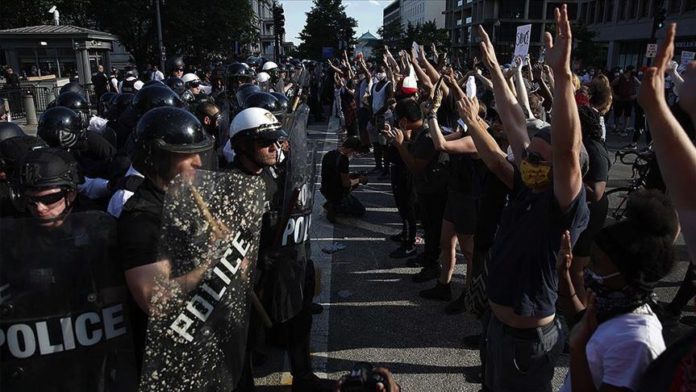 Despite curfews in major US cities, demonstrators took to the streets for a sixth day of protests Sunday over the murder of George Floyd, an unarmed black man who died after being pinned down by a white police officer in Minneapolis, Minnesota.

Floyd, 46, died after officer Derek Chauvin knelt on his neck for nearly nine minutes. His last words were “I can’t breathe,” which became the slogan of the nationwide protests.

Protestors in the city demanded the arrest of the three other officers who were involved in his death.

Earlier in the day, a semi-truck drove through a crowd of thousands of protesters marching down a highway in Minneapolis. Later, authorities announced the arrest of the driver.

The Minneapolis Police Department said a group of protesters who violated an extended nighttime curfew have been arrested.

Floyd’s killing prompted tens of thousands of people to take to the streets from Seattle to New York. Several cities saw the National Guard activated in response to violent protests.

In the nation’s capital, Washington DC, Lafayette Park across from the White House became the focal point Sunday of protests, during which police clashed with demonstrators and fires and breaches of security barricades took place.

The demonstrators, including White, Black and Hispanic Americans and Muslims, chanted “I can’t breathe,” “Hands up, Don’t shoot!,” “No Justice, No Peace” and “Black Lives Matter.”

According to multiple reports, President Donald Trump was taken to the bunker at the White House as protestors breached the security barricade. CNN said the president took shelter there for about an hour.

Peaceful protests also took place in parts of the country.

Hundreds marched peacefully through downtown and Klyde Warren Park in Dallas, Texas, and streets were clear ahead of a 7 p.m. curfew, according to the Axios news website.

But in Lansing, Michigan, demonstrators who had gathered peacefully in the state capitol clashed with police and one car was set on fire.

In San Diego, California, a group of demonstrators hurled rocks at police, who in return used tear gas to disperse them. Looting took place in cities including Santa Monica and San Jose.

In a separate development, former NBA star Michael Jordan said he is “deeply saddened, truly pained and plain angry” after the death of Floyd.

“We have had enough. Every one of us needs to be part of the solution, and we must work together to ensure justice for all,” Jordan said in a statement posted on social media.

“Black folks been getting killed for a long time now…people are just tired right now. African Americans, they want stand up for what’s right,” he said.

In Atlanta, Georgia, a police officer tased a man and used excessive force on a woman, which sparked a furor.