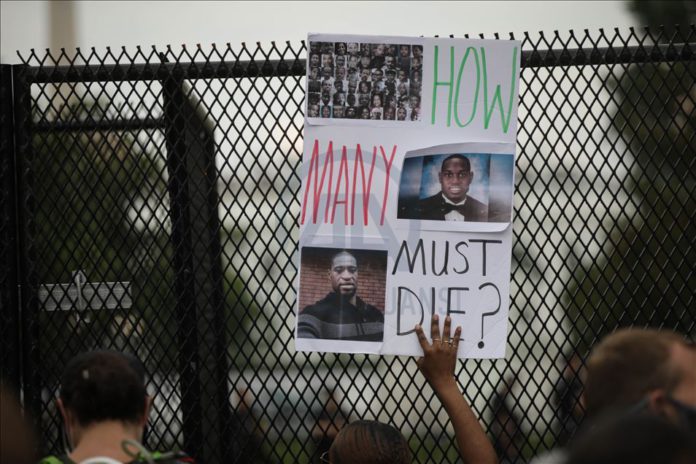 Protests continued over George Floyd’s death for a 10th consecutive day Thursday as mostly peaceful demonstrations were held in several US cities.

WASHINGTON, USA – JUNE 04: A person holds a banner during a protest over the death of George Floyd on June 4, 2020 at Lafayette Square near White House in Washington, DC, United States. George Floyd, an unarmed, handcuffed black man who was killed in police custody late last month. His death prompted largely peaceful mass demonstrations that have continued across the US, though some have devolved into violence and looting. ( Yasin Ö

In the nation’s capital Washington, DC, hundreds of people gathered at Lafayette Park across from the White House for a seventh day.

The focal point of the protests was free of any military presence and protestors were separated by a tall metal fence erected days ago.

Earlier in the day, DC Mayor Muriel Bowser said there will be no curfew in the city.

Thousands of people marched across the Brooklyn Bridge in New York City after a memorial that commemorated Floyd.

Hundreds of mourners on Thursday attended the first of several memorials at North Central University in Minneapolis.

The event was attended by Floyd’s family and Ben Crump, the civil rights attorney representing the family, as well as celebrity guests.

His death prompted largely peaceful mass demonstrations that have continued across the US, though some have devolved into violence and looting.

Chauvin was taken into custody last Friday when authorities announced an initial set of charges that were upgraded Wednesday from third-degree murder to murder in the second degree.

Three other officers at the scene when Floyd was arrested for allegedly using a $20 counterfeit bill at a store — Tou Thao, J. Alexander Kueng and Thomas Lane — were charged with aiding and abetting murder in the second degree, a felony offense.

CSKA Moscow renews with US star James till 2023