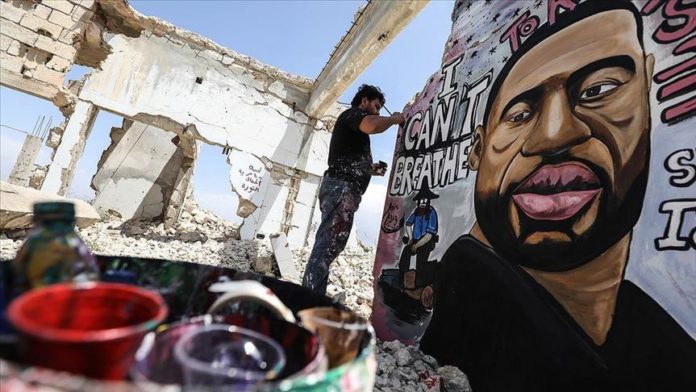 A wall in Idlib, northwestern Syria, now has image of George Floyd, an unarmed black man who was killed last week in the US while being pinned down by a white police officer in Minneapolis, Minnesota.

Floyd was immortalized by Aziz Esmer, renowned for painting figures related to Syria and other crises in the world on Idlib’s war-torn walls.

His latest image of Floyd was viewed from a drone and can be seen with the last words of the victim: “I can’t breathe.” It also has “No racism” across the image.

The artist denounced all racism in the US against blacks and told Anadolu Agency he drew the image in solidarity.

“The international community has let us, Syrians, down for the last 10 years, but we still support humanitarian issues all around the world, as it is our humanitarian duty,” Esmer said.

Floyd, 46, was arrested last week after reportedly attempting to use a counterfeit $20 bill at a local store.

Shortly after, Floyd appeared to lose consciousness, but Chauvin maintained his position on the victim. He died soon after being taken to a hospital.

Four officers involved in Floyd’s arrest were fired the day after the video surfaced. But Chauvin has so far been the only one arrested and charged with third-degree murder and manslaughter.

Nationwide protests that have lasted for one week have raged in the US with demonstrators demanding the other three officers also be arrested and face similar charges.