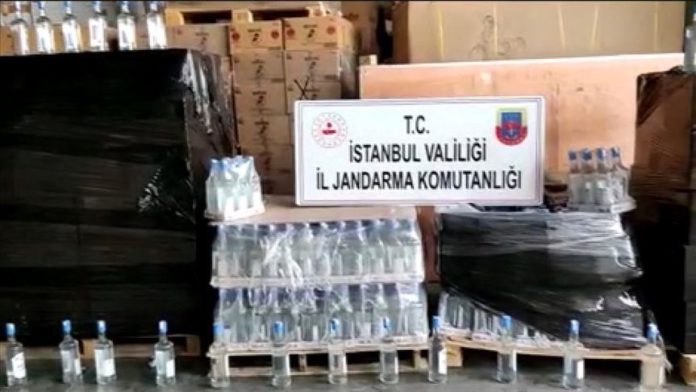 Gendarmerie forces in Istanbul seized 2.5 tons of bootleg alcohol amid intensified raids against the producers of counterfeit liquor.

Acting on a tip, provincial gendarmerie forces raided a warehouse in the Arnavutkoy district and arrested a suspect over his alleged involvement in the production of methyl alcohol.

Separately in the western Manisa province, some 190 liters of bootleg alcohol and materials used in its production were seized. Police teams detained a suspect in the operation.

In the southeastern Kilis province, police raided a workplace and seized 22 bottles of bootleg alcohol, also arresting a suspect.

In the Aegean Aydin province, a 34-year-old man was hospitalized over suspicions of methyl alcohol poisoning in the Kusadasi district. He later died.

Authorities have ramped up raids against producers of spurious liquor across Turkey, with 457 people arrested so far.

According to data compiled by Anadolu Agency, a total of 71 people in 10 provinces have died of methyl alcohol poisoning since Oct. 9.