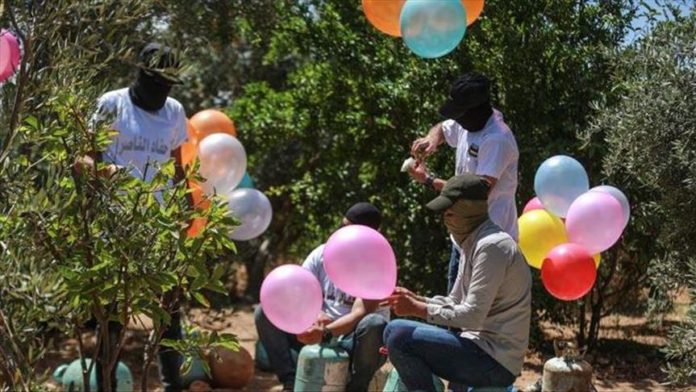 Abu Yassir, one of the activists, told Anadolu Agency that he and a number of Palestinian youths, members of the so-called “Descendants of Nasser Salah al-Din”, began launching batches of “incendiary balloons” from Gaza towards Israeli settlements near Gaza’s borders.

Abu Yassir, who refused to share his real name due to security concerns, said: “The resumption of firing balloons came in response to Israeli violations against Al-Aqsa Mosque, as well as the decision to annex parts of the West Bank.”

For the last year, Palestinian activists have been flying burning kites and balloons into Israeli territory as part of ongoing anti-occupation demonstrations along the fraught Gaza-Israel buffer zone.

Since 2019, Egypt, the UN and Qatar have been leading consultations to reach a truce between the Palestinian factions in Gaza and Israel, based on easing the blockade imposed on the Strip, in exchange for stopping Palestinian protests near the border with Israel.

More than 2 million Palestinians in Gaza are suffering poor conditions, due to the ongoing Israeli blockade on the Strip since Hamas won the legislative elections in the summer of 2006.

* Bassel Ibrahim contributed to this report from Ankara.