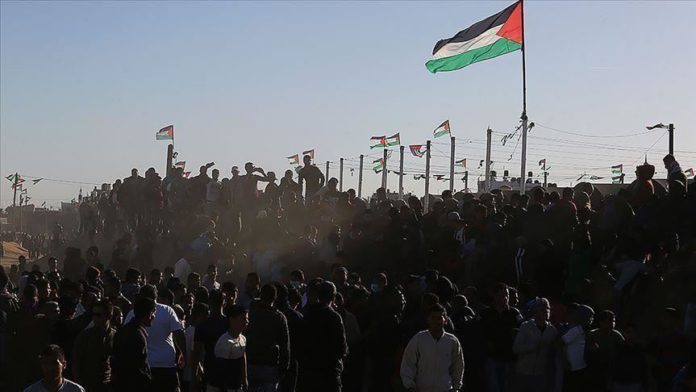 Palestinians in the Gaza Strip staged a protest on Monday to reject an Israeli plan to annex parts of the occupied West Bank.

Organized by the Joint Committee for Refugees, the demonstration was held in front the office of the UN refugee agency UNRWA in Gaza City, on the occasion of the World Refugee Day; which was marked on June 20.

Speaking at the protest, Ismail Radwan, a Hamas leading member, called on donor countries to continue their funding to UNRWA.

Radwan reiterated the committee’s rejection of “refugee resettlement projects and finding an alternative homeland for them”.

“The right of return is individual and collective duty that cannot be abandoned,” he said, demanding the implementation of UN Resolution 194 which stipulates that refugees must be allowed to go back to their homeland and to end the occupation.

Radwan said that the committee “rejects the alleged deal of the century and any decision regarding the Israeli annexation plan”.

He also called the Palestinian Authority to terminate the Oslo Accord and stop security coordination with Israel, holding the latter responsible for the consequences of its annexation plan.