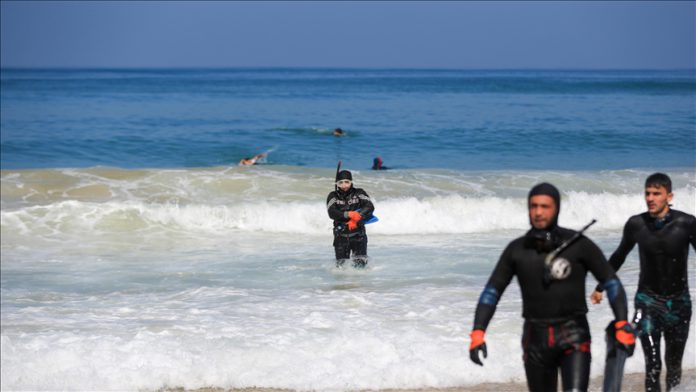 Palestinian divers from the Gaza Strip voluntarily participated Friday in a search for an Egyptians crew who drowned earlier this month in a boating accident.​​​​​​​

The campaign was launched from the beach of Al Zahraa, in southern Gaza City, where divers began a search operation in the Mediterranean Sea, carrying Egyptian flags, according to an Anadolu Agency correspondent.

Campaign official Hani Mekdad told the Turkish news agency that the move conveys “a message of goodness, from volunteer divers in the Gaza Strip to our brothers in Egypt.”

“The divers insisted to dive to search for the Egyptian brothers who drowned in the sea of ​​the Egyptian city of Port Said during the past few days,” he said.

“Despite the lack of resources and the blockade, the Palestinian divers insisted on carrying out the search process to emphasize the depth of Arab and Islamic relations,” added Mekdad.

Egypt’s official MENA news agency said Feb. 17 that “a boat sank while delivering parcels from a shipping agency to a ship anchored in the Mediterranean, off Port Said.”

It said the crew of five drowned because of bad weather and high waves and that only one body was recovered, while a search for the remaining crew was being conducted.

The Palestinian Ministry of Interior in the Gaza Strip found another crew member Feb. 20 after his body was swept by waves to the shores of Rafah in the southern part of the strip.

Libya: US to put sanctions on those who threaten peace