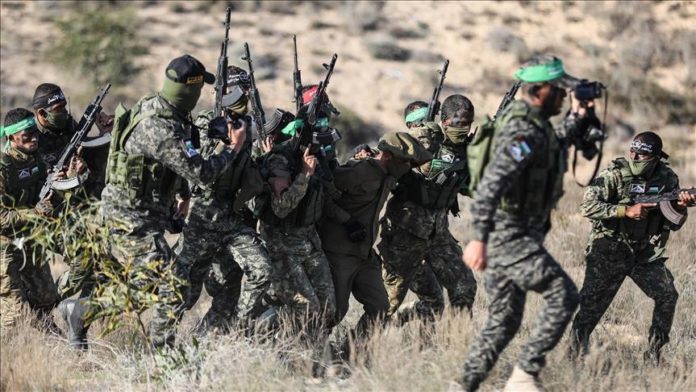 A joint military drill conducted by Palestinian resistance factions in the Gaza Strip is a “message of warning” to Israel over any possible assault on the blockaded territory, political analysts believe.

Palestinian factions said Tuesday the military exercise aimed to “enhance the combat readiness of their fighters to fight in various conditions”.

The training, in which the armed wings of all Gaza-based factions participated except President Mahmoud Abbas’ Fatah group, saw the launch of rocket barrages toward the Mediterranean and the use of drones among other military practices.

He said the military exercise was of a “defensive nature that aimed to enhance the home front and raise the combat readiness of the factions”.

Abu Amer opines that coordination shown during the drill provides a model for the possibility of forming a unified military force similar to an army to counter any Israeli attack.

“The resistance anticipates a possible Israeli aggression against Gaza during the last days of outgoing US President Donald Trump in the White House,” Abu Amer said. “Gaza has sent a message that it is fully ready to resist any [Israeli] aggression.”

The military spokesman of the joint operations room of Palestinian factions said the exercise emphasizes the unity of the resistance groups in any possible Israeli attack on Gaza.

“This military maneuver is the culmination of joint military preparations and training, and an embodiment of the resistance’s efforts to permanently raise their combat readiness,” he told a press conference in Gaza City on Tuesday.

Mukhaimer Abu Saada, a lecturer of political science at Al-Azhar University in Gaza, said the exercise was intended to send a warning to Israel against any attack on the Palestinian territory.

“The timing of the drill coincided with the anniversary of the 2008 Israeli war on Gaza and came as living conditions in Gaza continued to deteriorate in light of the coronavirus outbreak,” he told Anadolu Agency.

“The economic situation is very bad, and the pandemic has had bad repercussions on Gaza, let alone the Israeli restrictions on the entry of testing tool kits and vaccinations,” Abu Saada said.

The political analyst ruled out a breakthrough regarding truce understandings and prisoner swap between Hamas and Israel as Tel Aviv prepares for election in March, the country’s fourth polls in two years.

Hamas, which rules the Gaza Strip, is holding four Israeli soldiers since 2014.

“Military escalation is more likely to happen, particularly in the period before the Israeli election,” Abu Saada said.

Israeli newspaper Yedioth Ahronoth described the Palestinian drill as a “deterrent maneuver” by Hamas in response to Israeli statements about Tel Aviv’s readiness for a confrontation.

The daily cited maneuvers conducted by Israel’s Southern Command and the Gaza Division weeks ago as a rehearsal for the occupation of the Gaza Strip as well as “an expression of the uncertainty in the transition period between the Trump administration and the Biden administration.”

A state of maturity

“Over the past decades, the state of unilateral action has been a point of weakness for Palestinian factions, which Israel has exploited,” Afifa told Anadolu Agency.

He said the drill was meant to boost the confidence of the Palestinian people, “who have been exhausted in their confrontation with the Israeli occupation”.

The Gaza Strip suffers from catastrophic humanitarian conditions due to the Israeli blockade that has been imposed in 2007.

Palestinian factions accuse Israel of delaying the implementation of its obligations under recent truce understandings in terms of easing the siege and allowing the supply of medicines and equipment to stem the spread of COVID-19.