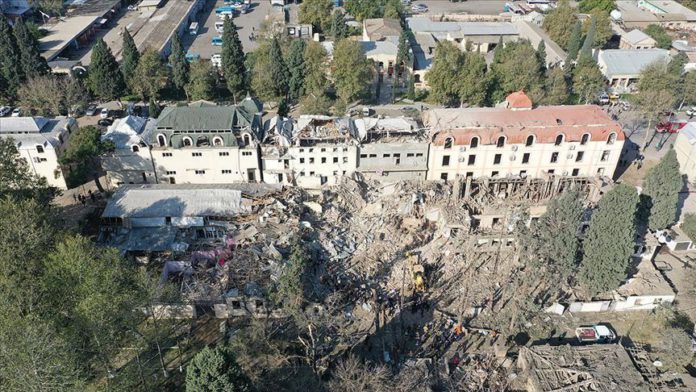 Azerbaijan’s ambassador to the UN in Geneva said Wednesday that a recent deadly attack on his country’s second-largest city by Armenia openly violated the Geneva Conventions and was a “war crime.”

Ambassador Vaqif Sadiqov was speaking at a press conference hosted by the UN journalists’ association in Geneva, known as ACANU, about the conflict in Nagorno-Karabakh.

Sadiqov underlined that the attack on Saturday in Ganja that killed 13 civilians was an “open violation of the Geneva Conventions and relevant protocols.”

“Under any situation, the occupying power should not allow the citizens on this territory to be hit, and it should not hit any civilians,” said Sadiqov.

He accused Yerevan of being “cynical” by claiming that Baku had carried out the attack itself, adding that Armenian troops had hit Azerbaijanis living in the Nagorno-Karabakh region, also known as Upper Karabakh, where both groups of people resided.

He said Armenia had used such arguments since 1992, when conflict erupted in Nagorno-Karabakh.

“So, this is the repetition of the same nonsense, here in the case of Ganja,” said Sadiqov. “Of course, it’s a war crime.”

“Deliberate shelling” by Armenia has so far caused 63 civilians killed on the Azerbaijani side, as well as 292 injured and about 2,000 dwellings destroyed or damaged, said the ambassador.

“We are ready to stop the military advancement of our troops only with one condition that the Armenia forces have to leave the territory of Azerbaijan,” said Sadiqov.

Turkey has supported Baku’s right to self-defense and demanded a withdrawal of the occupying forces.