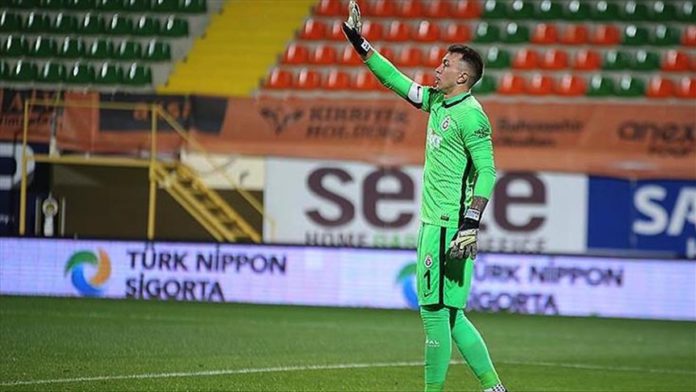 The 34-year-old team captain has been a Galatasaray regular for 10 seasons as Muslera joined the Istanbul club from Italy’s Lazio in 2011.

Galatasaray will take on Buyuksehir Belediye Erzurumspor in a Saturday league match in Istanbul.

His first Super Lig game was against Medipol Basaksehir in 2011 as Galatasaray lost 2-0.

Muslera had his 100th Super Lig appearance in 2014 that Galatasaray hammered Trabzonspor 4-1.

The Uruguayan international’s 200th league match for Galatasaray was against Konyaspor in 2017 that Istanbul club won 2-1.

The player was brandished with two red cards and 26 yellow cards.

370 appearances in all competitions

Muslera had the most club appearance among all Galatasaray foreigners.

The experienced goalkeeper had 39 UEFA Champions League appearances for Galatasaray.

He played in 19 Turkish Cup and 7 TFF Super Cup matches. Muslera also had 6 UEFA Europa League appearances for the Lions.

The Uruguayan national beat a former Galatasaray goalkeeper Zoran Simovic, who had 239 appearances for the Turkish team.

Simovic from Montenegro was the Galatasaray regular in 1984-1990.

The former Colombian goalkeeper Faryd Mondragon racked up 238 matches for Galatasaray from 2001 to 2007.

Fernando Muslera had the most titles (14) among Galatasaray foreigners in club history.

The previous record-holder in this field was a Galatasaray legend, Romanian attacking midfielder Gheorghe Hagi.

The ex-Romanian superstar played for Galatasaray in 1996-2001.

Muslera had a major injury last season as he got his tibia and fibula broken in a league match against Caykur Rizespor in June 2020.

So Muslera was ineligible for a long time, which was over seven months.

He returned to the game on Jan. 20 in a league game against Yukatel Denizlispor.

The Uruguayan international had a steady performance as a goalkeeper but scored a goal in his career.

Muslera converted a penalty kick successfully for Galatasaray in a 2012 league game against Manisaspor that Lions won 4-0.

Galatasaray was awarded a penalty near the end of this match as fans in the stadium asked him to take the shot from the white spot, a rare football habit.

Muslera accepted the fans’ request and rushed from his goal to take the penalty and scored against Manisaspor.