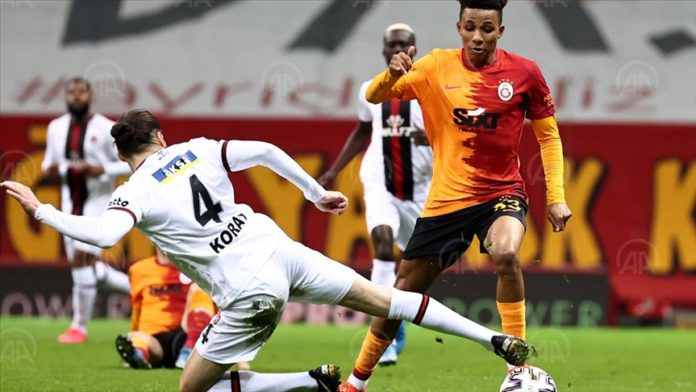 Galatasaray on Saturday disappointed fans with a 1-1 home draw in a Turkish Super Lig match against Fatih Karagumruk as the Lions’ hopes for a local title are fading rapidly.

Egyptian forward Mostafa Mohamed scored in the ninth minute but the goal was disallowed because the Lions’ Dutch forward Ryan Babel was whistled for a handball before the goal. The referee’s ruling came after a Video Assistant Referee (VAR) review.

Fatih Karagumruk broke the deadlock in minute 59 when Senegalese winger Alassane Ndao followed a rebound by Galatasaray goalkeeper Fernando Muslera after a shot by Yannis Salibur’s, giving the 1-0 edge to the visitors at Turk Telekom Stadium.

Three minutes later, Galatasaray had a quick response when Dutch forward Ryan Babel dribbled past his opponent in the penalty area and converted on a close-range finish. Portuguese midfielder Gedson Fernandes assisted making it 1-1.

Galatasaray defender Ryan Donk was sent off after a foul in the 79th minute and the Lions was down to 10 men.

In the 86th minute, Galatasaray were awarded a penalty kick as Turkish winger Kerem Akturkoglu was brought down in the penalty area. But after a VAR review, the referee canceled the penalty.

The game ended as Fatih Karagumruk bagged the draw.

Third-place Galatasaray have 62 points in 32 matches.

The Super Lig table is led by archrivals Besiktas, who racked up 67 points. On Sunday, Besiktas will visit Buyuksehir Belediye Erzurumspor.

Meanwhile, Fenerbahce are in the second position with 63 points.

Fenerbahce will host Gaziantep at Istanbul’s Ulker Stadium on Monday.