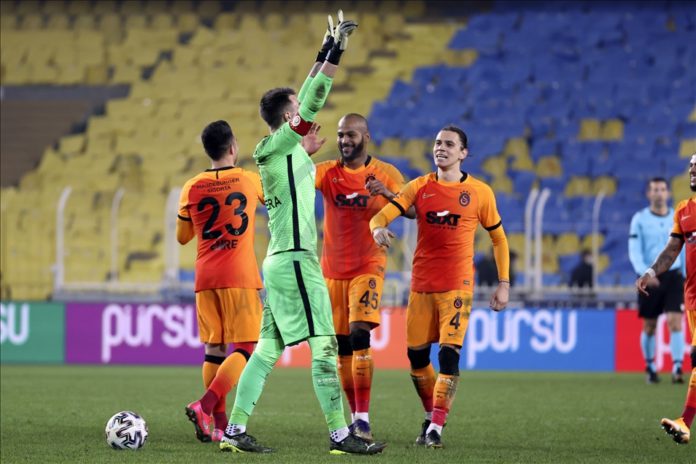 Galatasaray claimed a 1-0 away victory against Fenerbahce in Saturday’s Turkish Super Lig derby.

Fenerbahce hosted Galatasaray at the most anticipated game of week 24 at the Ulker Stadium.

In the 39th minute, Galatasaray goalie Fernando Muslera produced a brilliant save to tip over a strike from Jose Sosa.

Neither team was able to break the deadlock in the first half.

Egyptian forward Mostafa Mohamed scored the winning goal with a close-range finish in the 54th minute.

In the 75th minute, Ozan Tufan equalized the game with a header but the goal was disallowed for offside after a Video Assistant Referee — VAR — review.

The game ended with a 1-0 score in Kadikoy.

Following this result, Galatasaray climbed to the Super Lig’s top spot with 48 points, ahead of second-place Fenerbahce on goal difference.

Mesut Ozil made his home debut for Fenerbahce during the match, substituting Mert Hakan Yandas in the 62nd minute.

A free-kick from Ozil, who recently transferred from Arsenal, was saved by Muslera.

For Galatasaray, Portuguese midfielder Gedson Fernandes and injured Algerian midfielder Sofiane Feghouli were also not in the squad.

In a post-game interview, Galatasaray manager Fatih Terim said that the team did not compromise on their dominant style of play, especially in the first 30 minutes.

Winning this game was important but It was even more important to climb to the top of Super Lig, Terim said.

For his part, Fenerbahce head coach Erol Bulut said his team was in control during some parts of the game.

“We performed differently in the first and second halves. The whole second half, we controlled the game but missed many goalscoring opportunities,” Bulut said.

“I think we gave everything to win this game during the 90th minute but unfortunately, we didn’t score,” Szalai said.