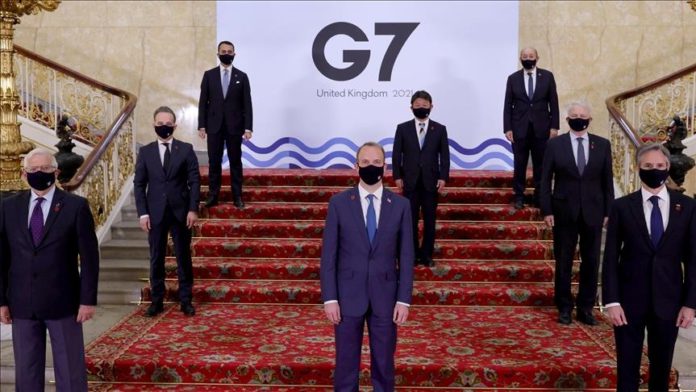 The G7 foreign ministers on Friday condemned an “unlawful attack” on the Mercer Street merchant vessel, which they blamed on Iran.

The attack took place off the coast of Oman on July 29 and two people were killed, including a British national.

“This was a deliberate and targeted attack, and a clear violation of international law. All available evidence clearly points to Iran. There is no justification for this attack,” a joint statement read.

The foreign ministers said vessels must be allowed to navigate freely in accordance with international law, and they will continue to do their utmost to protect all shipping so that it can operate freely without the threat of violence.

“Iran’s behaviour, alongside its support to proxy forces and non-state armed actors, threatens international peace and security,” it said. “We call on Iran to stop all activities inconsistent with relevant UN Security Council resolutions, and call on all parties to play a constructive role in fostering regional stability and peace.”

The statement was signed by the top diplomats of Canada, France, Germany, Italy, Japan, the UK, and US, as well as the EU high representative.

Meanwhile, the US Central Command (CENTCOM), which is the Pentagon’s Middle East command, said in a statement that the Mercer Street came under attack from drones twice, before a third fatal attack took place.

Explosives experts were able to recover pieces of the third drone, including a vertical stabilizer and internal components, which the US military said “were nearly identical to previously collected examples from Iranian one-way attack UAVs.”

“The distance from the Iranian coast to the locations of the attacks was within the range of documented Iranian one-way attack UAVs,” CENTCOM said. “Following an on-scene analysis, some of the material was transferred to U.S. Fifth Fleet headquarters in Manama, Bahrain and subsequently to a U.S. national laboratory for further testing and verification.”

The evidence was presented to both Israel and the UK that “concurred” that the drone was produced in Iran, the central command added.

*Michael Hernandez contributed to this report from Washington.