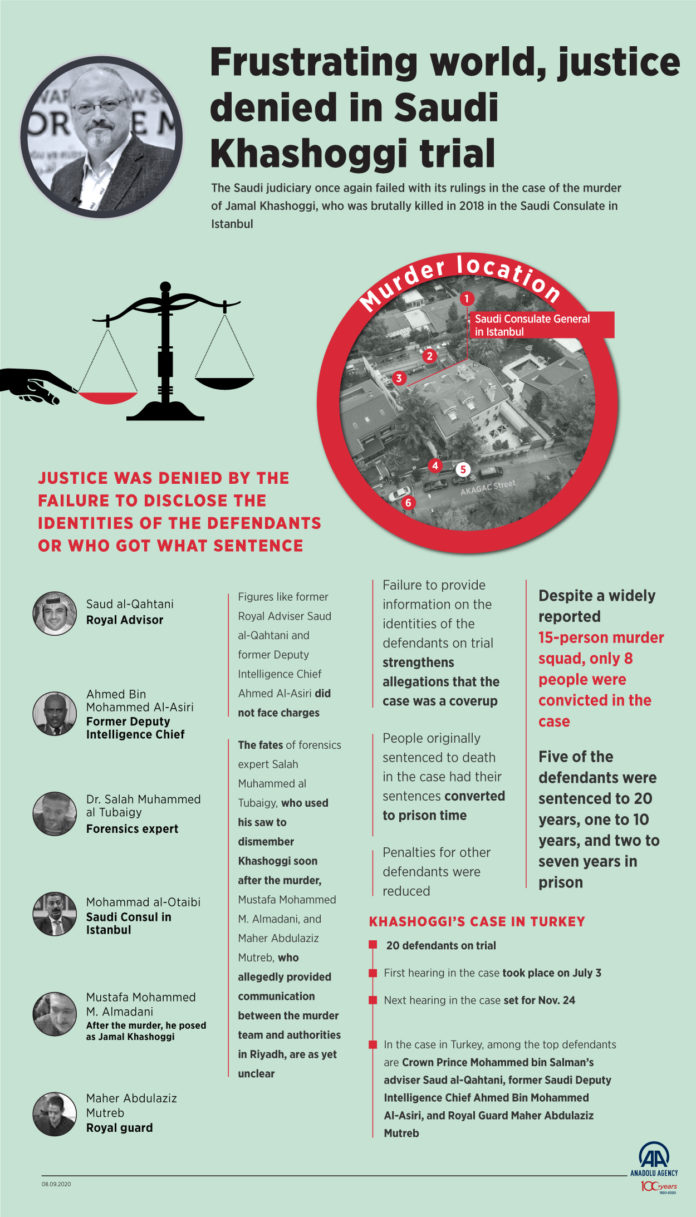 The Saudi judiciary once again failed in its rulings on the murder of Washington Post journalist Jamal Khashoggi, who was brutally killed in 2018 in the Saudi Consulate in Istanbul.

According to the state-run Saudi Press Agency (SPA), the chief prosecutor announced the final verdicts for eight defendants tried in the Khashoggi case. Five of the defendants were sentenced to 20 years, one to 10 years and the two remaining to seven years each in prison.

Justice was denied by the failure to disclose the identities of the defendants or who got which sentence, strengthening allegations that the case was merely a coverup.

Final ruling not a surprise

The decision of the criminal court in the capital Riyadh was expected amid the Saudi authorities’ lackadaisical attitude since the murder was committed.

During the investigation into Khashoggi’s death, jurists held back information on the people allegedly involved in the murder, despite the manner of the killing and the amount of evidence found.

Despite a widely reported 15-person murder squad, only eight people were convicted.

The US’ Central Intelligence Agency (CIA) had previously released findings that several figures close to Saudi Crown Prince Mohammed bin Salman had been involved in the killing, making headlines across the world press.

Also noteworthy was that the sentences of five people tried with the death penalty had been converted to prison and the penalties for other defendants had been reduced.

The fate of forensics expert Salah Muhammed al Tubaigy, who used his bone saw to dismember Khashoggi soon after the murder, Mustafa Mohammed M. Almadani, and Maher Abdulaziz Mutreb, who allegedly provided communication between the murder team and authorities in Riyadh, are as yet unclear.

“The Saudi Prosecutor performed one more act today in this parody of justice. But these verdicts carry no legal or moral legitimacy,” tweeted Callamard, the UN special rapporteur on extrajudicial executions.

“The five hitmen are sentenced to 20 years imprisonment, but the high-level officials who organized and embraced the execution of Jamal Khashoggi have walked free from the start — barely touched by the investigation and trial,” Callamard underlined.

“As for the individual responsibility of the person on top of the State, the Crown Prince Mohammed bin Salman, he has remained well protected against any kind of meaningful scrutiny in his country.”

Callamard said the verdicts could not be allowed the whitewashing of the actual events and should not be able to exert any pressure on governments.

She also stressed that Monday’s decision should not relieve the pressure by other governments to reveal the true criminals, especially referring to the five permanent members of the UN Security Council.

Callamard said she welcomed the death penalty being commuted.

Shaalan al-Shaalan, a spokesman from the Saudi attorney general’s office, had announced on Dec. 23, 2019, that the first stage of Khashoggi’s case had been completed.

Al-Shaalan said five out of 11 defendants on trial got the death penalty and three others accused of covering up the murder were sentenced to a total of 24 years in prison.

He added that the ruling was open to appeal and that a statement on the sentences would be made after the final decision.

The slain journalist’s son, Salah Khashoggi, had said in his statement on behalf of his family on May 22 that they had forgiven his father’s killers.

Khashoggi went to the Saudi consulate in Istanbul on Oct. 2, 2018, to obtain a document and could not leave again. He was brutally murdered at the consulate and his body dismembered.

But the truth was delayed for an extended time as the killing had taken place in a foreign mission and the Saudi authorities were reluctant to cooperate.

Saudi authorities have made numerous contradictory statements from the beginning of the incident. Turkey’s evidence and pressure from the international community made Riyadh retract and correct its statements multiple times.

At first, Riyadh insisted that Khashoggi left the consulate but following the emergence of evidence two weeks after the murder, it admitted that he died during a brawl that broke out in the consulate.

Failing to resolve these question marks, Saudi Arabia finally took the official position that “a team was formed to bring Khashoggi, he was killed by injecting poison and his body was cut into pieces and removed from the consulate.”

In Turkey, the first hearing in the case took place on July 3.

The next hearing in the case is set for Nov. 24.