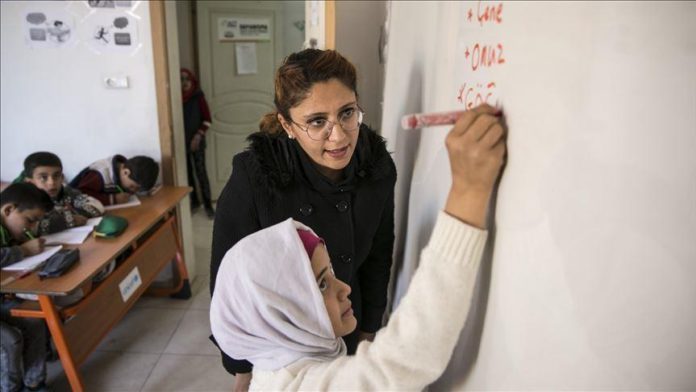 After fleeing the horrors of war in Syria, a young refugee taking shelter in neighboring Turkey has achieved remarkable successes and now has distinguished himself as one of the few students to get a perfect score on his high school entrance exam.

“When I first came to Turkey in 2015, I didn’t know Turkish, and I started my schooling as a grade 3 student in Turkey’s southeastern Siirt province,” said Dlyar Safo.

“I started focusing on the exam nearly two years ago,” he said, referring to the all-important LGS high school entrance exam, which includes questions on both math and social sciences.

At his school, the Kurtalan Selahaddin Eyyubi Imam Hatip Secondary School, he worked hard, and his teachers tried to constantly motivate him, especially when he felt down due to the pandemic.

Crediting them for his success, he explained that his teachers regularly sent him “practice questions for exam preparation via WhatsApp,” as schools were not meeting in person due to the COVID-19 pandemic.

“I was expecting and focused on getting full marks, and I worked for that goal,” he said.

The exam was held on June 6, and this week the National Education Ministry said that 97 students from 36 provinces answered all the questions correctly to get full points, including Dlyar.

From Syria to Turkey

Telling how he fled the war in Syria and took refuge in Kurtalan in Siirt, near Turkey’s borders, Safo said: “We had relatives in Kurtalan, so we migrated there from Qamishli in northeastern Syria.”

“My mother and father are tailors, so this is how we make our living,” he said, adding that he has two younger siblings too.

“I can speak four languages including Turkish, Arabic, Kurdish, and English. I’m interested in math. I love it,” he said, adding that his goal is to be an engineer.

“I haven’t decided yet which high school I’ll go to. My teachers and I are searching for the best,” he stressed.

Expressing gratitude to his teachers and family for their support, he said success requires everyone to have self-confidence and belief in oneself.

‘We’re all children of same civilization’

“We took care of our child. He learned Turkish well,” he said, adding that children are successful “when we join hands and show interest.”

“His family wanted to leave the district due to financial difficulties. We didn’t want him to leave,” Polat said, adding that many education officials and the parent-teacher association have been supporting the family for three years.

“We were aware of Safo’s abilities. We formed a team to support him. We regularly checked his work and gave him intensive support, especially during the four months leading up the exam,” he added.

There are four or five Syrian students in the district, including Safo’s younger sister, who also did well on the exam, said Polat.

The other students have learned Turkish well and have no problems, he said.

Syria has been locked in a vicious civil war since early 2011 when the Bashar al-Assad regime unleashed unprecedented repression on pro-democracy protests. Since then, hundreds of thousands of people have been killed and more than 10 million others displaced, according to UN officials.

Turkey hosts some 4 million Syrian refugees, more than any country in the world, and its policy of welcoming the refugees with open arms has been hailed as a model worldwide.

According to official figures, more than 684,000 Syrian school-age children attended schools in Turkey during the 2019-2020 academic year.