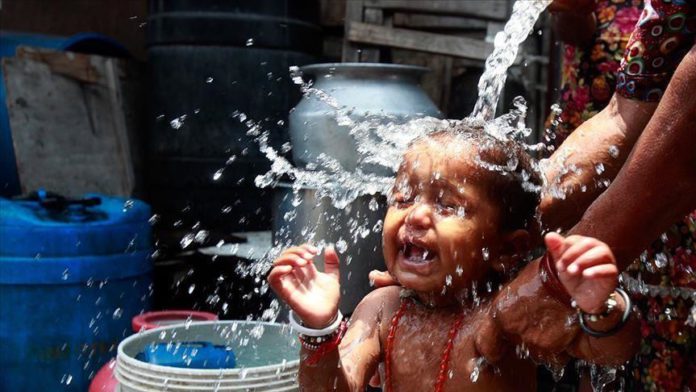 From the Arctic to the Alps a hot summer had a significant impact on ice shelves and glaciers in the northern hemisphere, with this year’s season hit by new temperature records in the Arctic, the World Meteorological Organization (WMO) said Tuesday.

“Today is the start of the Northern Hemisphere autumn in meteorological terms. Summer 2020 had a major impact on ice shelves and glaciers,” WMO spokesperson Clare Nullis told a twice-weekly UN briefing.

“The summer of 2020 has been marked by many new temperature records.”

On June 20, the Siberian town of Verkhoyansk, located above the Arctic circle at a latitude of 67.55 N, experienced 38 degrees Celsius (100.4 F) for the first time.

Maximum temperatures in June exceeded 30 C for 10 days before that, said the WMO.

Further north, on the Svalbard archipelago in Norway, at the latitude 78 N, a new temperature measurement shattered a 41-year-old record, with 21.7 C (71 F) measured in the town of Longyearbyen on July 25.

“Record-breaking wildfires accompanied the heatwave across the Arctic in Russia, close-to record low sea ice extent, and the collapse of one of the last fully intact Canadian ice shelves,” said Nullis.

“Temperatures in the Arctic are rising faster than the global average. Unique amplification processes and feedbacks, such as the rapid decline of sea ice, significantly contribute to this warming,” she added.

The effects vary in time and scale across the Arctic, and the consequences of a warming Arctic will be far-reaching across the northern hemisphere.

She said the rapid decline of sea ice, then, in turn, contributes to more warming, “and so the circle goes on.”

“And the consequences do not stay in the Arctic. Similar temperature trends are being observed in the European Alps with similar consequences,” said Nullis.

Temperatures in the Alps have risen 2 C during the 20th century, she said, noting that the rise is attributed to the reduction in snow ice cover revealing darker rocks that absorb more solar radiation.

Even if temperature records had not been broken in the Alps this year during the northern summer period, a sustained heatwave was recorded through July and the beginning of August.

In France, 40.4 C was recorded at the beginning of July in Ayze, a small town in the heart of the Mont Blanc massif, while 5 C was measured at 4,000 meters (13,123 feet) above Courmayeur, on the Italian side of Mont Blanc, in early August.

In Switzerland, the Turtmann Glacier in the Valais split in two, losing 300,000 square meters (3.2 million square feet) in a dramatic collapse on Aug. 6, captured on video by a hiker.

“The glacier retreat in the Alps affects the landscapes and also water resources and parts of the economy.

“Abrupt mass loss events like the one observed at Turtmanngletscher are rare but are illustrative for how glaciers suffer from abnormally warm summers,” said Nullis.

Affected by the persistent heavy precipitation in Jiali County since late May, the Jinwuco moraine-dammed lake in Niwu Township, Jiali County, in the Tibet Autonomous Region of China burst on June 25.

Environmental disasters across world in April 2020

The world becomes cleaner, as emissions fall in April