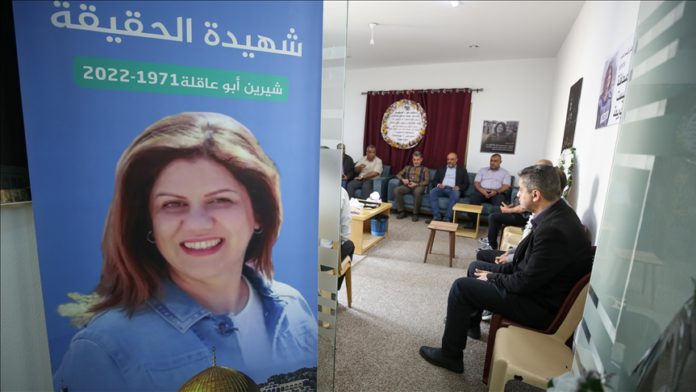 Speaking to Anadolu Agency Riham Maqadmeh, 28, a Palestinian journalist said she is heartbroken by her death. She had met Akleh first time in 2019 at Birzeit University when both of them attended the diploma program in digital media.

Israeli sniper allegedly killed Abu Akleh near Jenin camp when she was with a group of Palestinian journalists covering the Israeli military’s forced entry into the neighborhood.

Many times, during their study at Birzeit University Riham and Shireen, returned to their neighborhood together, sharing their daily stories.

“She loved the dogs. She lived with her dog (Felfel) and narrated many stories. A few months ago, her dog traveled to the US, where a part of her family is living. May be dog survived the pain that we experience now,” said Maqadma.

“All the time she was carrying a pen and a notebook to write her notes and what she learned. She was passionate about developing herself and learning continuously,” she said.

For the new generation of Palestinian journalists, Akleh was a model and an inspiration to study journalism. She said that her coverage of the second intifada in 2000 was outstanding.

Mohammad Ghafri, 32, working with Anadolu Agency recalled emotionally how he was inspired by Akleh since his childhood.

“We used to have breakfast together every Saturday. She always preferred thyme pie and many times she came to the university with breakfast for us from the old city of Jerusalem. She was a benevolent and simple person,” he said.

During their study at Birzeit University, Ghafri escorted Akleh during the work and execution of projects.

“When we were on the street doing our projects, I learned a lot about her, as a humane and as a journalist. She inspired me to do the best to gain the best knowledge and experience,” Ghafri told Anadolu Agency.

“At her home terrace, she had planted a little olive tree. She was always joking that she needs our help to get at least three little fruits on it. She was confident that her little tree will give her a bottle of olive oil one day,” he said.

In Ramallah, hundreds of Palestinian journalists gathered to pay last respects to Akleh.

At Rossary Sister High School in Jerusalem where Shireen graduated in 1989, many people paid tributes to her and recalled her student days.

She was born in Jerusalem in 1971 and graduated with a bachelor’s degree in journalism from Al-Yarmouk University in Jordan. She worked as a reporter from Palestine for the Al Jazeera network from 1997 until her death. She had adopted American citizenship.