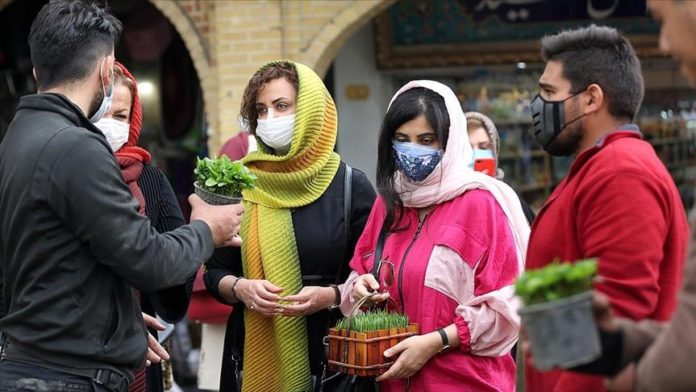 Iranian authorities on Sunday reinstated restrictions in the capital Tehran and other major cities amid a spike in new coronavirus infections.

The restrictions include curbs on the movement between cities, with many areas designated as orange and red, from yellow and white, signaling high risk.

According to officials, the latest wave of the virus follows two-week New Year (Nowruz) holidays from March 18, during which people traveled to different parts of the country.

Tehran, the most populous city in Iran with heavy vehicular traffic, has turned orange from yellow, which means the movement to and from the city would incur a penalty.

According to the latest data released by health officials, a total of 79 cities come under the ban, including Tehran, Qom, Mashhad, and many cities in the north and south.

A nighttime curfew in Tehran also remains in place, with updated hours to be implemented from 10 p.m. to 3 a.m. local time, officials said.

Alireza Zali, the head of the anti-pandemic taskforce in Tehran, on Saturday said the situation in Tehran was “changing,” which he said was “expected” due to an increase in the flow of outpatients at city hospitals.

He said a large number of new cases were linked to a mutated virus that has a “higher rate of color change,” referring to cities turning from yellow to orange.

Iran, which reported the first cases of the virus in February last year, has so far recorded nearly 1.85 million cases and 62,308 deaths.

The country has seen at least three waves of the virus so far, and authorities have been making all-out efforts to pre-empt the fourth wave that has been looming for months.

Authorities said Saturday more than 160,000 people have been vaccinated so far and over 600,000 vaccines have been supplied to clinics and hospitals across the country.

With the import of US- and UK-made vaccines banned by the Iranian government, the race to produce a homegrown vaccine continues, which is likely to be ready by summer.