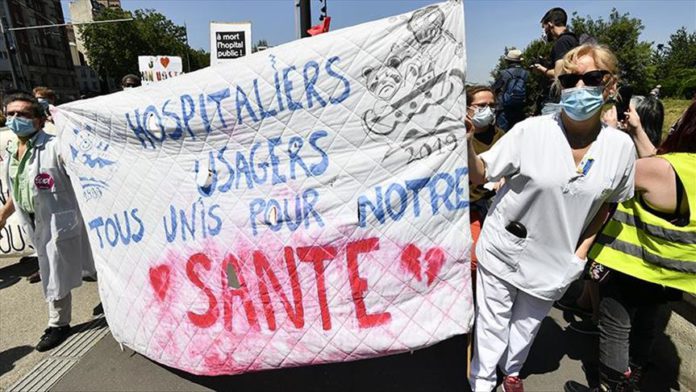 Nurses, doctors, caregivers, and hospital workers took to the streets on Tuesday to remind the government of promises made late May for better working conditions and higher pay in medical facilities, with France’s largest health worker unions leading the charge.

The protests followed on President Emmanuel Macron’s Segur de la Sante, a program of measures announced at the end of May to help equip the state to better perform. The coronavirus pandemic exposed multiple shortcomings in the system such as the amount of personal protective equipment — masks, helmets, garments — on hand, as well as conditions, including a more balanced work week, and more personnel needed to handle future cases.

In Paris, protesters assembled — some donning yellow vests — Tuesday afternoon in front of the Health Ministry to voice their concerns, with Philip Martinez — the head of the General Confederation of Labour — and Yves Veyrier — the head of Force Ouvrier — present, along with the unions FO, Unsa, Sud, and Collective Inter-Hospitals.

In an interview Tuesday morning the broadcast of franceinfo radio, Martinez had recapped the need for the demonstrations, citing the lack of staff and an inappropriate number of beds in facilities.

“We are told that they will make a diagnosis of the reality of the hospital during the Segur de la sante. The diagnosis is made. These are answers that caregivers are waiting for,” he said.

In Le Havre, a major port in the northern Normandy region, doctors and nurses took to the forecourt at the Monod Hospital.

In Rennes, Brittany, in the north, demonstrators gathered in front of the regional health agency, while in Montpellier in the south, protesters stood in front of the Arnaud de Villeneuve Hospital to make their voices heard. Approximately 220 events were planned for Tuesday nationwide.

The workers’ demands started over a year ago, and have been well heard by the current administration. Macron has also pledged €200 million ($225.3 million) to finance pharmaceutical production infrastructure, research, and production.