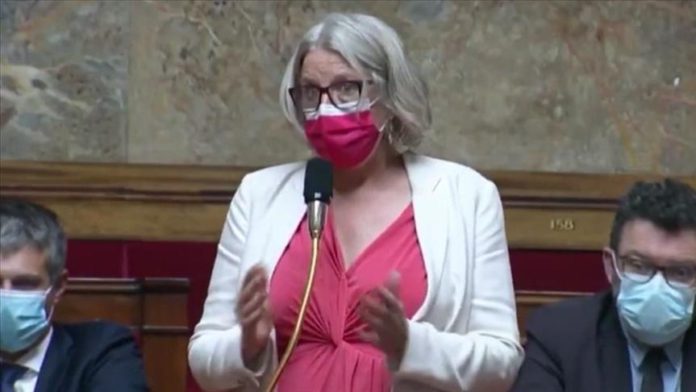 A French lawmaker on Wednesday criticized how women in the country who wear headscarves are targeted while taking part in a debate in parliament on a controversial separatism bill.

“I really don’t understand why we target women with headscarves [in France] and not other things,” lawmaker Annie Chapelier told parliament.

The proposal sparked discussions in parliament, and Chapelier, a member of the Agir ensemble group in the National Assembly, reminded that only 25% of voters go to the ballot boxes and some polling stations desperately seek poll workers.

She stressed that the government was developing theories to ban people who do their civic duty from being polling officials.

“Before headscarved women intervened at the ballot boxes, men wearing kippah were not told anything,” she said, adding that being a poll worker should be equally open for everyone just like citizenship.

“Don’t make fake excuses to target and accuse women with headscarves that you don’t want to accept,” she said.

After a two-hour debate on the article, the proposal was rejected by parliament.

The proposed law was first introduced by Macron last year to fight so-called “Islamist separatism.” It was adopted by the Senate on Feb. 13 with several amendments that toughen provisions previously approved by the National Assembly.

The assembly began re-debating the draft bill on June 28.

The bill prohibits parents from wearing visible religious symbols while accompanying their children on school trips, the wearing of the burkini — a swimming costume that covers the whole body with the exception of the face, hands and feet and is worn by many Muslim women — in public swimming pools and “preventing minor girls from concealing their face or wearing religious symbols in the public space.”

It also bans “prayers on university premises and the display of foreign flags at weddings.”

It is being criticized by the international community, non-governmental organizations and especially the UN for targeting and alienating the Muslim community and imposing restrictions on almost every aspect of their lives.

There has been a rise in attacks on mosques in the country since the announcement of the draft bill. While some mosques have come under arson attack, others’ walls have been sprayed with Islamophobic slogans.

Rachida Kabbouri, a top polling official during France’s regional elections on June 20, was demoted from her post for wearing a headscarf.

Kabbouri, a Muslim municipal councilor of the European Ecology – The Greens (EELV) party in Vitry-sur-Seine in the greater Paris Ile-de-France region, had been appointed head of a polling station in the department of Val-de-Marne during the first round of elections.

Speaking to the French media after the incident, she said she “felt injustice and exclusion to tears.”