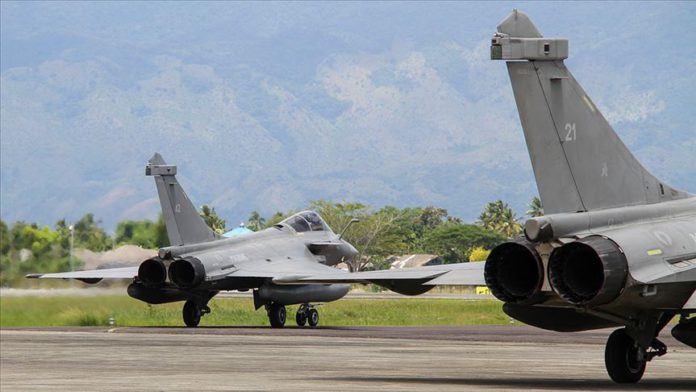 Two Rafale-type fighter jets and a C-130 cargo aircraft belonging to the French Air Force landed in the Andreas Papandreou airbase in Paphos as part of a defense cooperation agreement signed Aug.1, according to the Greek Cypriot daily Politis.

The jets will stay for a few days in Paphos, from which they will cooperate with French naval forces in the region and patrol the so-called exclusive economic zone that the Greek Cypriot administration declared unilaterally.

France and the Greek Cypriot administration plan to conduct an airborne military exercise in September, though other countries may also participate in the drill.

According to local media on Aug. 6, a defense cooperation agreement signed between the two in 2017 entered into force at the beginning of the month.

The Greek Cypriot administration and France hold activities in various fields, especially in the Eastern Mediterranean, and lead a partnership targeting Turkey and the Turkish Republic of Northern Cyprus (TRNC).

Last month, after Athens objected to the activities of Turkey’s seismic research vessel, the MTA Oruc Reis, in an area south of the island of Meis, or Kastellorizo, German diplomatic efforts helped defuse tensions between Turkey and Greece.

Turkey also announced Monday that the Oruc Reis would continue to conduct research in the region until Aug. 23.