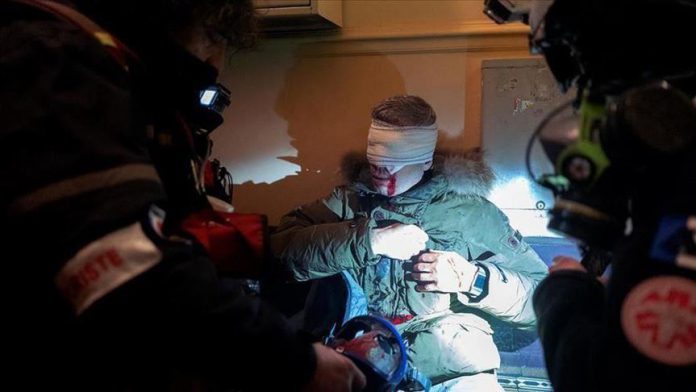 An Anadolu Agency photojournalist wounded badly by French police on Thursday was the victim of a plastic hand grenade, said Ronan Pacs, an eyewitness who gave the reporter first aid at the scene.

Pacs said that there were many journalists covering the protests, adding that black-masked vandals were not present when the incident occurred, to the best of his knowledge.

He claimed that Yalcin was hit by a plastic hand grenade — also known by its French acronym DMP — used by security forces to disperse protestors.

Saying that the DMP had a large impact in its explosion radius, he added that it exploded near Yalcin and its pieces pierced his helmet, breaking its glass and leading to serious injury to his left eye.

Pacs, who works as a lifeguard, said he was sure that two separate grenade pieces struck Yalcin’s helmet.

He went on to say that when a nearby truck was torched, he tried to move people away from a possible explosion, adding he could have died if one of the gas bottles nearby had caught fire.

When healthcare personnel rushed to help Yalcin, he said, they put a compress on the eye to absorb a great deal of blood, adding that he thinks it unlikely the eye can be saved.

According to Pacs, the protests escalated after Yalcin’s injury and the area became a treatment zone due to a growing number of wounded protestors, adding he had never seen such tension in months.

Yalcin was covering the clashes between French police and demonstrators against controversial plans for pension reforms when he was injured. Though he underwent a six-hour-long operation, Yalcin still faces the risk of permanently loss of eyesight.

On Friday Senol Kazanci, chairman of the board and director general of Anadolu Agency, called on French authorities to investigate Yalcin’s injury, saying the news agency would follow the process.