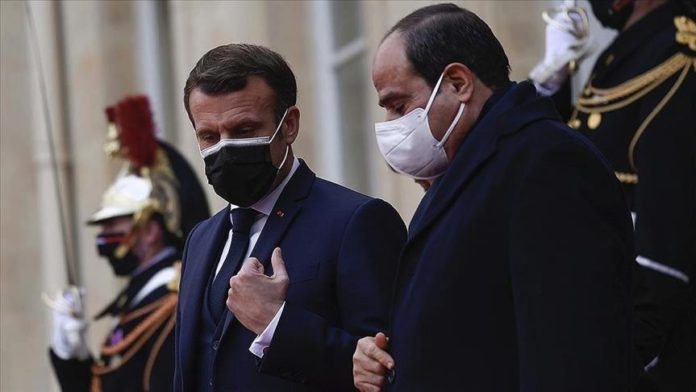 While some French citizens, whom Anadolu Agency spoke to, criticized al-Sisi’s visit, others supported the move, saying it is related to “our national interests.”

Alicia Milliaud said it was not fair to award the highest French order of merit to al-Sisi, given the persistent human rights violations in the Middle East country.

“What I find most strange is that the decision of awarding al-Sisi during his state visit was concealed from the public, which shows that something unusual is happening,” she said.

Bianca Marquez, echoed the same idea and said that since al-Sisi’s meetings with the Paris mayor and the defense minister were also kept “secret,” it seems there is something suspicious.

For Marie, who was hesitant to share her surname, it was shocking to see France rolling out the red carpet to al-Sisi. “This approach shows that the visit is only for economic interests,” she said.

It is meaningful to see that as a sign of protest, Italian journalist and writer Corrado Augias has returned his Legion of Honor award, she added.

“This Legion of Honor will not bring anything to Macron or al-Sisi,” said Tayyip Maurice, and expressed opposition to the French president’s policies.

Alix, who also wished to be identified by the first name only, argued that the Egyptian head of state’s visit was important for bilateral relations.

Claiming that it could contribute to solving international conflicts to some extent, he said there was nothing wrong in awarding al-Sisi.

Nicolas Gossez agreed, and termed the visit “normal” in the context of international relations. “Countries cannot be expected to be far away from each other.”

New hopes to end 6 years of war in Yemen