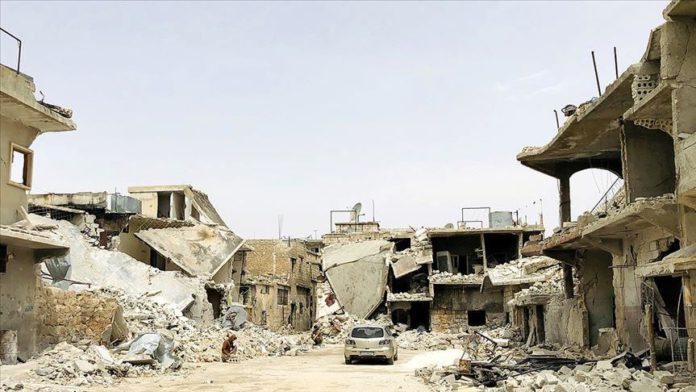 A France-based Christian group has allegedly been supporting a militia in Syria loyal to the Bashar al-Assad regime and accused of war crimes in the western Hama province, local media reported.

Though claiming to have come to the aid of the Christians in Syria without intervening in the conflict, SOS Chretiens d’Orient (Christians of the Middle East) has backed militias known by the Assad regime as the Mhardeh National Defense Forces (MNDF) since 2013, according to French news website Mediapart.

The group is considered a “partner organization in national defense” by the French Ministry of Defense.

Local businessman Simon al-Wakeel, who heads the MNDF, is accused of various war crimes during the civil war and can be seen in a YouTube video clad in a regime uniform thanking SOS.

The MNDF started as a people’s movement but became a militia with al-Wakeel footing the bill. It has taken part in regime attacks on Hama and Idlib in 2019.

According to the Syrian Human Rights Network, they sold items they looted from the villages they entered in the Christian village of Skelbiye, close to Mhardeh.

SOS, which refers to al-Wakeel as “Monsieur Simon,” has established a humanitarian aid center in Mhardeh as a “symbol of Syrian resistance against international terrorism.”

The organization has also praised Mhardeh’s combat prowess, saying the group had been surrounded by opposition groups — a claim rejected by experts.

Another video recorded in 2016 by the group aiming to project itself as having only humanitarian intent in Syria shows Alexandre Goodarzy, one of its leading figures, handing out blankets and food to regime militias. Goodarzy has also been known for his poses brandishing Kalashnikov rifles in the war-torn country.

According to a report by Syrian rights group Pro-Justice, 25 civilians were killed in a 2012 bombing that targeted their homes in Halfaya — a mere kilometer (0.6 miles) from Mhardeh — on al-Wakeel’s orders.

SOS is also accused of withholding information on how it spent the donations it collected for the war in Syria.

Between 2016 and 2019, it is estimated that the donations collected for Monsieur Simon and Mhardeh amounted to €48,900 ($58,000), while documents belonging to the organization claim that militia fighters were provided coffee, tea and cigarettes to make their lives easier.

Since the eruption of the bloody civil war in Syria in 2011, thousands of people died and millions fled the country or were displaced from their hometowns. Various terrorist groups such as the YPG/PKK and Daesh/ISIS took advantage of the instability and chaos that has ensued since the conflict erupted to realize their terror activities. It has also led to one of the biggest refugee crises in history.