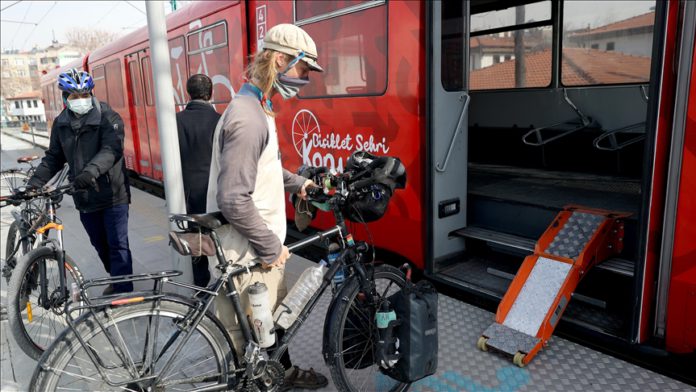 A French traveler who stopped in the central province of Konya en route to China, was impressed with the city’s bicycle-friendly transportation network and facilities.

Alexis Bottemer, 25, from France started to pedal in July, with an eventual aim of reaching China by following the historical Silk Road route.

When he stopped in Konya after pedaling 9,200 kilometers (5,716 miles) in seven months, he was impressed with the dedicated bicyclist routes, bicycle tram and repair stations the city offered.

“I have felt like I am in a European city,” he said.

Seeing the Mevlana Square, Kulturpark and bicycle routes, Bottemer remarked: “I have been to 11 European countries before reaching Turkey, but Turkish people’s hospitality is second to none.”

He thanked local tourism and municipality officials who accompanied him on visits to historical sites, including Mevlana’s tomb.

But one official, Yunus Gunes, said tourism would be different in the post-coronavirus pandemic era.

“In that era, tourists are expected to avoid mass-tourism and prefer alternatives such as bicycles and caravans to travel. Turkey should be ready for this,” he said.